Eurogroup President: Greece Will not Make it Without Aid 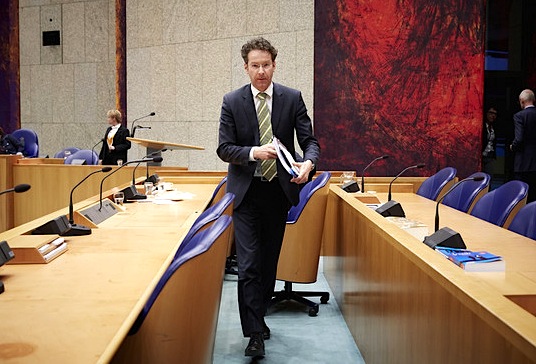 Eurogroup President Jeroen Dijsselbloem said on Tuesday that a recent reshuffle of Prime Minister Alexis Tsipras’ negotiating team will not resolve the impasse between Greece and its creditors by itself, and Athens will need new loans to stay afloat.
“Without further loans, Greece will not make it, that’s the reality,” Dijsselbloem was quoted as saying by Reuters in a television interview to RTL Nieuws. He said that there is very little money left and without help, Greece will not be able to exit the crisis.
Dijsselbloem said that it is good news that the Greeks have appointed a single contact person for negotiations, although it does not resolve the problems between Greece and the Eurogroup. “It is not just about Finances, it’s also about Energy, Justice, Foreign Affairs…It is so large [the field] that we need a direct contact, under the responsibility of the Prime Minister [Alexis Tsipras],” he added.
The Eurogroup President also noted that little progress has been made in negotiations over the past two months and sometimes there were even some backward steps. He signaled he did not think a Greek referendum on a deal with creditors would be a good idea. “It would cost money, it would create great political uncertainty and I don’t think we have the time,” Dijsselbloem said. “And I don’t think the Greeks have the time for it.”
Commenting on the stance of the European Central Bank (ECB) toward Greece, the EU official said it should not have come as a surprise to the Greek government that the ECB has not relaxed limits on how much Greek government debt its banks may use as collateral.
“The Greek government gambled that if it negotiated with us, the ECB would open its cashier windows, relax its rules,” Dijsselbloem said.
But “there will be no easy access to the ECB’s windows until there is a solid agreement with the Eurogroup,” he told RTL Nieuws. “That has been made clear to them, over and over again.”
(source: ana-mpa)