TechNews
GreekReporter.com Greece St. George: The Most Beloved Saint in the World

St. George: The Most Beloved Saint in the World 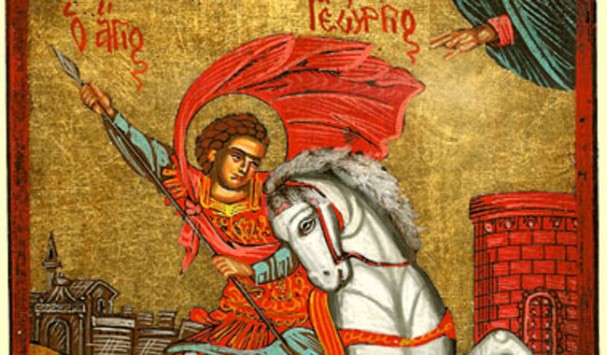 George is the most popular name in Greece and Saint George is one of the most beloved saints throughout the Christian world. In hagiography, Saint George is one of the most venerated saints in the Catholic Church, Anglican, Orthodox, East Syrian, and Miaphysite Churches. He is immortalized in the myth of Saint George and the Dragon and is one of the Fourteen Holy Helpers.
Saint George was the son of a rich and aristocratic family in Cappadocia, Asia Minor. His parents decided to name him Georgios, a Greek name that means “worker of the land.” He was an officer for the Roman army. George lived from the end of the 3rd century through the beginning of the 4th century, during emperor Diocletian’s reign. His memory is celebrated twice a year: on April 23 the Church commemorates his decapitation, however if the date falls before Holy Saturday, then it is postponed to the first Monday after Easter, while on November 3, the Church commemorated the consecration of a cathedral dedicated to him, where his relics were transferred.
Saint George is very much honored by the Eastern Orthodox Church, wherein he is referred to as a “Great Martyr.”
The traditional legends have offered a historicized narration of George’s encounter with a dragon. According to tradition, the dragon was guarding a spring in Libya and it wouldn’t let the residents take any water if they didn’t first sacrifice one of their compatriots. The victim was chosen by drawing lots. One day, this happened to be the princess. The monarch begged for her life to be spared, but to no avail. She was offered to the dragon, but then Saint George appeared and faced the dragon, protecting himself with the sign of the Cross. He slayed the dragon, and rescued the princess. The citizens abandoned their ancestral paganism and converted to Christianity.
Saint George is the patron saint of the Greek army, since during his life he used to work as a military officer. Furthermore, he is also the patron saint of England.
Saint George is also associated with agriculture and proliferation say his name derives from the Greek word “georgia” meaning agriculture. The day the church commemorates Saint George (April 23) is a day of sowing for farmers in Greece.

Zagori is an awe-inspiring natural landscape with an incredibly well-preserved network of 46 villages and features national parks, rivers and waterfalls.
Greece