Only God Can Repay the Greek Debt 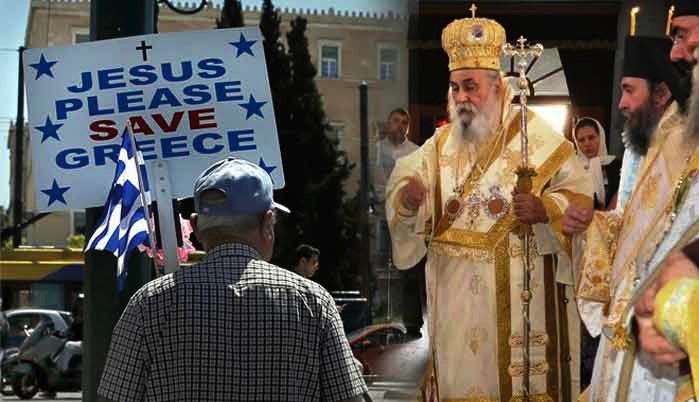 What do Alexis Tsipras, George Soros, Noam Chomsky, Yanis Varoufakis, James Galbraith, Costas Simitis, Standard & Poor’s and the average Greek person on the street have in common? They all agree that the Greek debt is unsustainable.
Negotiations between Greece and creditors have stalled, again. Lenders insist on austerity measures in order to continue providing financial aid. The Greek government has drawn certain red lines on issues such as pensions, security funds, labor laws and value added tax. Neither side seems willing to back down. Gunfight at the O.K. Brussels is upon us, since our loving European partners of February 20th have become again “strict blackmailers,” “ruthless colonialists,” “killers of Greek society.” There is never a shortage of excessive expressions among Greek politicians.
The Greek government has sought alternatives for financial aid as time is running out and state coffers are emptying at an alarming rate. Unfortunately, the Russians don’t give out rubles easily and the Chinese are very cautious with their yuan.
At the moment, the country is at a dangerous dead-end and on the brink of bankruptcy. Only divine intervention can pull Greece out of its financial woes. And since God does not make public appearances or hand out cash, his representatives on earth can come forth and help our poor country come out of this horrible economic mess.
In Greece’s case, God’s representative is the Greek Orthodox Church. A Church that has a long history of going hand in hand with the Greek state and has helped a lot in building modern Greece after the Independence War against Ottoman rule. Church and state have been inseparable in recent Greek history and the separation of the two has been a taboo subject throughout the years.
In the five years of harsh recession where over 3,000 Greeks have committed suicide because of financial troubles, thousands more became homeless and hundreds of thousands scientists and degreed individuals have sought a decent life abroad, the Church of Greece has been absent. Soup kitchens and a few handouts are very little for such a big crisis.
On Holy Saturday, Archbishop of Athens and All Greece Ieronymos II said on Greek television that the Church is ready to offer the use of its businesses and enterprises in order to help repay the Greek debt. This was the first official statement coming from the Church of Greece that promised to help the country in a time of need. Asked if he meant selling real estate properties that belong to the Church of Greece, Ieronymos answered that what he really meant is using church assets in joint actions with the state in order to generate profits that will help repay the country’s debt.
That was a very vague statement, similar to the “contructive vagueness” Mr. Varoufakis espouses. Prime Minister Alexis Tsipras sent a letter to the Archbishop thanking him and asking him to commence the collaboration. So far, there has been no further mention of the issue.
The Greek Left has often expressed the opinion that church and state should be separated and since the Church of Greece is very wealthy, its assets should be taxed and clergy should not get paid by the state as public sector employees. The new leftist government has not touched on this sensitive issue.
There is a mist — probably divine — covering the assets of the Church of Greece. There is no register of Church property. Unofficial estimates speak about 8 trillion euros, an astronomical amount, almost one twentieth of the Greek debt. However, its wealth is hidden behind about 10,000 public corporations (churches, monasteries, foundations, bequests). There is such secrecy that surrounds the actual riches of the Church of Greece that not even its highest administration knows exactly the value of assets of individual churches, monasteries, foundations, or parishes.
The Church of Greece owns about 1,300,000 acres in land property, according to figures given by the Ministry of Agriculture in the past. It includes small islands and islets. The individual wealth of 2,500 monasteries cannot be measured. The Church also owns about 800 commercial buildings, such as hotels, office buildings and malls. Its liquidity is estimated at hundreds of millions of euros. It has also set up two limited liability corporations. The Church of Greece is also major shareholder in two Greek banks and in the past has lent to the Greek state at a 6 percent interest rate.
It’s about time then the Church of Greece does its duty to a state that has been so generous to it and help repay the Greek debt.