US Secretary of State Kerry: Cyprus Problem Begging for Solution 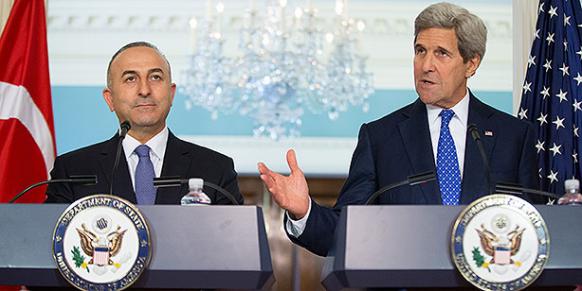 US Secretary of State John Kerry said yesterday that the Cyprus problem is begging for an international solution and progress in United Nations-backed peace talks. Speaking before a meeting with Turkish Foreign Minister Mevlut Cavusoglu at the State Department, the US official highlighted that the island’s division had gone on for too long.

“It is begging for international efforts to try to help bring about a resolution, a lasting settlement,” Kerry said, adding that his government believes “that the parties can make real and lasting progress in 2015.” On his behalf, the Turkish Foreign Minister said the United States have a role in resolving the dispute. “We want to reach a lasting solution in Cyprus. We are hoping to reach a solution within 2015… We are waiting at the negotiating table,” he stressed. Moreover, he said that the peace talks should immediately continue after the so-called “presidential elections” in the northern occupied part of Cyprus, the self-proclaimed “Turkish-Cypriot state.” Current Turkish-Cypriot leader Dervis Eroglu failed to win the election on Sunday, paving the way for a runoff later this month.

Cyprus, which is a member of the European Union since 2004, has been violently divided since 1974, after a brutal Turkish invasion and the following occupation of its northern lands or 37% of its territory. On its part, Turkey has repeatedly denied to recognize the Republic of Cyprus, despite numerous calls by international institutions and the European Union, which Ankara aims to join. At the same time, numerous United Nations-backed negotiations to reunite the island under a federal government have failed. In October 2014, Cypriot President Nicos Anastasiades suspended his participation in the peace talks following a Navigational Telex (NAVTEX) issued by Turkey for the conduction of hydrocarbons research in Cyprus’ Exclusive Economic Zone (EEZ) by seismic vessel “Barbaros,”escorted by a number of Turkish Navy ships.