GRNews
GreekReporter.comSportsBasketballEuroleague Playoffs: Panathinaikos Gets His first Win over CSKA

Euroleague Playoffs: Panathinaikos Gets His first Win over CSKA 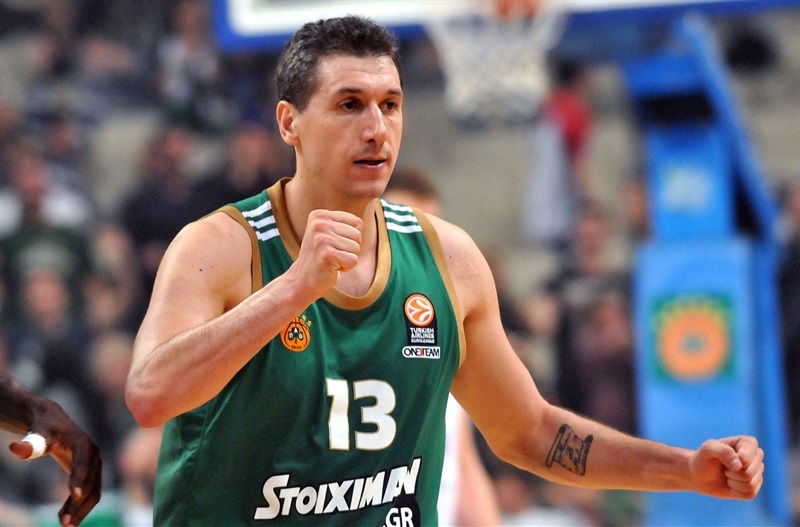 Panathinaikos played with the fire in the last seconds of the match but was able to hold the +1 margin and pick up its first victory of the series at the OAKA Sports Center in Athens against CSKA for the Euroleague Playoffs.
It was largely requested by the Green fans not to be swept by the most expensive club in history, as there was a name they had built over the last 20 years that they needed to stand up for. And in accordance to their wishes, Dusko Ivanovic’s players pulled it together and grabbed one back.
Nikos Pappas lead the Six-Starred with five personal records; most points (25), most assists (4), most steals (4), most minutes played (30.33) and highest Index rating (31). Generally speaking, the whole team’s shooting ameliorated, making 16/31 three-point shots breaking the record of most-made in a Euroleague Playoff game.

The Russians kept Panathinaikos in close range throughout the first three quarters (14-20, 34-34, 56-53) till Nikos Papas bolted and with back-to-back threes made the score 71-61 in the fourth. But Sonny Weems (24 points) woke up at the right moment and by scoring 15 of his points in the last quarter killed the difference down to 2 (77-75) with 63″ remaining.
After a timeout, Panathinaikos desperately moved the ball to Pappas who shot over the outstretched Weems for yet another three-pointer and an 80-75 lead with 44 seconds left. Weems broke down the Panathinaikos defense for a layup with 31.6 seconds left to make it 80-77. CSKA fouled Diamantidis, who made 2 of 2 with foul shots, but Weems needed only seconds to drill from the arc again, his third of the final quarter, making it 82-80. CSKA put Pappas on the line, and he made both, too. Unbelievably, Teodosic fell out of bounds on one three-point miss, but CSKA got the offensive rebound to him and he hit a second try with 12.3 seconds left, making it a one-point game, 84-83. Immediately after a timeout, CSKA sent Diamantidis back to the line, where he missed the first, but made the second. With 10.8 seconds left, De Colo drove full-court and missed a layup, but Hines put it back for an 85-85 tie. Pappas made 1 of 2 free throws with 3.5 seconds left, keeping Panathinaikos ahead. CSKA had an inbounds to win it, but Teodosic’s pass eluded Weems and Panathinaikos had its first win of the series.
https://www.youtube.com/watch?v=oXkGeaGGDK8
Next game is scheduled for Wednesday April 22nd.