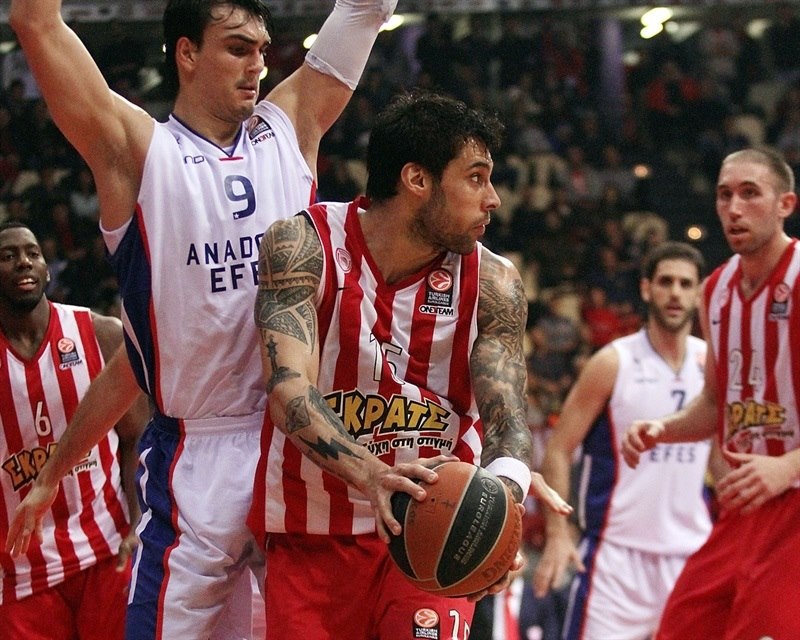 An incredible Olympiakos bombarded Barcelona in a packed “Palau Blaugrana” grabbing the 63-76 victory and breaking the series.
Olympiakos bounced back from their first game loss with the help of Giorgos Printezis who had the game of his life, tallying 34 points in ranking, 22 points and 9 rebounds, Vasilis Spanoulis who added 16 with four triplets in his first game after his injury and Vangelis Mantzaris who was flawless from the field with 4/4 three-pointers.
Olympiakos stole the home court advantage after tying 1-1 the best-out-of-five series. Games 3 and 4 are to be hosted in Piraeus next week.
By holding Barcelona to just 63 points, the 2011 and 2012 Champions ended a 8-0 losing streak against their playoff opponents and made a decisive step to reaching the final four for an eighth time in their history.

Printezis and Spanoulis shined early to give Olympiakos a 3-9 lead. The Reds excelled on defense throughout the first quarter, shutting down their opponent, while Matt Lojeski and Othello Hunter kept Olympiakos ahead, 10-15 after 10 minutes. Three-pointers by Spanoulis and Oliver Lafayette soon made it a double-digit game, 10-21, and an outstanding Printezis gave Olympiakos a 15-29 margin midway through the second quarter. Juan Carlos Navarro brought Barcelona within 25-35 at halftime – the least points by the hosts in a Euroleague home game at the break since March 2006. A rain of three-pointers by Mantzaris, Spanoulis, Printezis and Lojeski saw Olympiakos improve its margin to 45-56 after three quarters. Hunter and Mantzaris boosted the guests’ lead to 50-68 and Olympiakos kept full control until the final buzzer. Navarro paced the Barcelona attack with 16 points and Ante Tomic tallied 14 points and 14 rebounds.
https://www.youtube.com/watch?v=5AayuLYhjpo
The series will resume on Tuesday, April 21, at 9pm Athens Time.