GRNews
GreekReporter.comGreeceTsipras: 'Greece and Cyprus Are Pylons of Stability in the Region'

Tsipras: 'Greece and Cyprus Are Pylons of Stability in the Region' 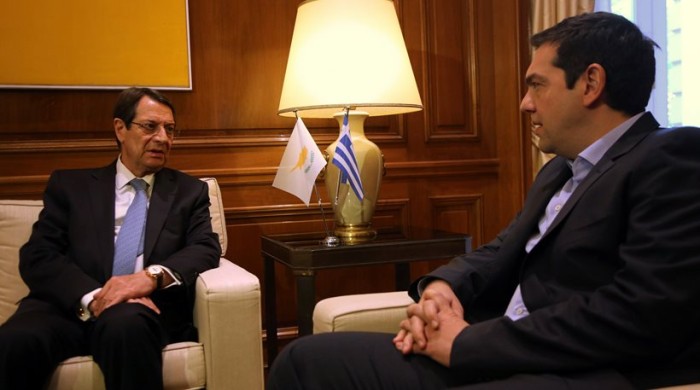 “Greece and Cyprus are a stability field in a wider region of conflicts and destabilization,” Greek Prime Minister Alexis Tsipras said after his meeting with Cypriot President Nicos Anastasiades.
“We agreed on a trilateral meeting with Egypt that contributes toward safeguarding peace and stability in the wider area of the Eastern Mediterranean,” Tsipras said, adding that the trilateral meeting is an invitation to other region forces to cooperate, always within the framework of the international UN principles.
Our first target is to focus on the continuation, until a final successful outcome, of the bicommunal talks for a just and viable solution to the Cyprus problem, Tsipras underlined.
The Turkish provocative actions and their repercussions over the solution of the Cyprus problem were discussed at the meeting. “We underlined that after Barbaros’ withdrawal, the conditions are better for the restart of discussions,” Tsipras added.
(Source: ANA-MPA)