TechNews
GreekReporter.comGreek NewsCrimeAthens University Rectorate: There Might Be Deaths if Occupation Continues

Athens University Rectorate: There Might Be Deaths if Occupation Continues 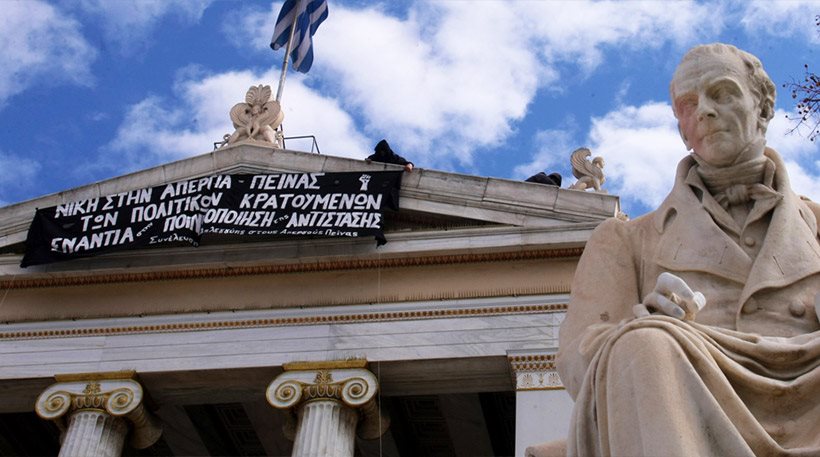 The National Kapodistrian University of Athens Rectorate sounded the alarm that if the occupation of the administration building continues, there might be deaths since there is extensive drug use on the premises.
The occupation of the administration building of Greece’s largest university is on its 16th day. The anarchists who occupy the building demand the closing down of maximum security prisons and the release of incarcerated terrorists.
Anarchists have destroyed two emblematic statues that decorate the building and have spray painted walls. According to university staff who chose to remain anonymous, there have also been vandalisms and looting inside the rectorate, while several drug addicts have entered the building and are using heroin. Several illegal immigrants have also found shelter in the rectorate.
On Monday night police arrested 15 people. One of the arrested was a wanted Polish drug dealer and two were Afghan nationals.
However, the anarchists who have occupied the building claim that there are no damages in the building and they uploaded a video of the inside of the rectorate in which no damages are shown. They claim that if there are any damages in the building it is the work of provocateurs.
The rectorate of the university has sent an open letter to Prime Minister Alexis Tsipras asking him to make the effort to put an end to the occupation.
In the letter they say that the occupation has isolated the university from the international educational community and several educational exchange events and activities have been cancelled. This damages the prestige of the university while at the same time making it impossible for the rectorate to communicate with faculty deans, thereby disabling the operation of the university.
Deputy Minister of Citizens Protection Yiannis Panousis claimed that he doesn’t have the approval from the ministry of the interior to intervene and send the police to evacuate the building. Minister of the Interior and Administrative Reconstruction Nikos Voutsis claimed last week that such incidents were normal during the previous government and they are not as extensive as they were in the past. House Speaker Zoe Konstantopoulou stated that it is the citizens’ right to protest.
Former rector of the university Theodoros Fortsakis stated that the government’s tolerance encourages occupants to extend their stay and continuously demand more, and suggested that if authorities cut the power, water supply and wi-fi, the occupants would leave the premises sooner or later.