Things that Make You Uniquely Greek 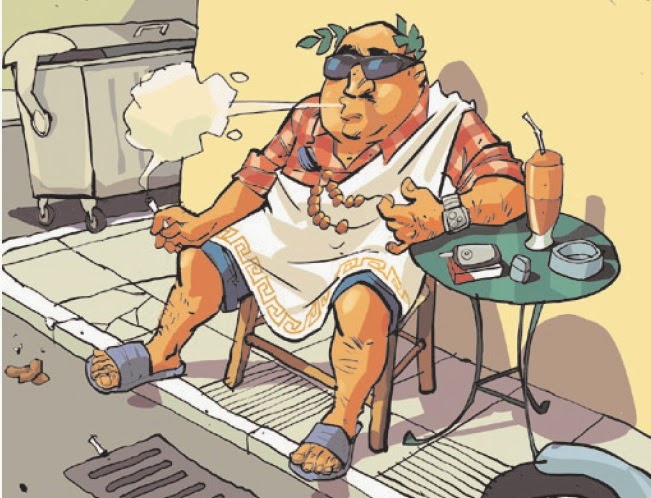 True Greeks have several characteristics and nuances that make them unique. Greeks indeed stand apart from other nationalities in many aspects of everyday life. To a foreigner, some of those may seem inconceivable, absurd even, but a Greek wouldn’t feel Greek unless he abides by certain “rules.”
So here are a few things (many belong to the past) that are said to make someone a real Greek or happen in Greece only!
1. Never eat dinner before 10:00 pm.
2. In your neighborhood, there is at least one street called “Eleftherios Venizelos street.” Even the Athens airport is called that.
3. You run several red lights to get to a coffee shop and then stare lazily at your frappe for three hours.
4. You travel abroad to escape from Greek attitudes for a while and during your trip you look for other Greeks to hang out with.
5. You applaud the pilot when landing.
6. You are not surprised when your 43-year-old buddy tells you he lives with his mom.
7. You consider it normal that someone gets a four-year university degree in 12 years.
8. You never have enough cash for necessities, but you always manage to find money for luxuries.
9. You hate public employees and call them lazy, but you dream of becoming one.
10. You go to church and pray to Jesus and the Virgin Mary on Sundays, but later you curse at them during the football game.
11. You light a cigarette before you enter the gym. And one as soon as you get out.
12. You wonder what the white lines are in pedestrian crossings.
13. You jog five kilometers but you take the elevator to the first floor.
14. You get in a traffic jam at 6:00 am on a Sunday.
15. You brag about what a womanizer your son is, but you claim your daughter is a virgin.
16. You wonder why people in the rest of the world don’t drink frappe.
17. You always honk to show the world you own a car.
18. When other drivers honk at you, you swear at them.
19. You paid 50,000 euros for your over-priced car, but you think the valet is a thief when he asks for 5 euros to park it.
20. You insist that the “evil eye” has been scientifically proven.
21. You believe that the rest of the world envies you for being Greek.
22. You are certain there is an international conspiracy to destroy your language.
23. You root for politicians even though you call them thieves in the next sentence.
24. You wonder how other countries survive when they don’t have kiosks in every corner.
25. You feel a burst of national pride when you hear the word “malakas” in a Hollywood movie.