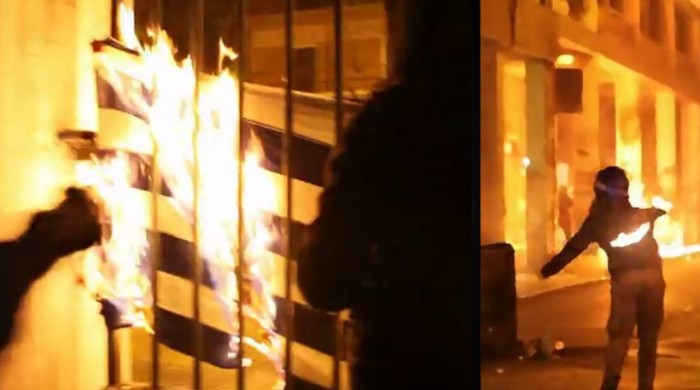 A shocking video depicting the riot that took place on Tuesday, April 7, in downtown Athens, Greece, near the Polytechnic school, was posted on YouTube by anti-authoritarians.
The video with the eloquent title “Athens: Front line view of the riot in solidarity to political prisoners on hunger strike” includes footage taken from the anti-authortitarians’ side while they were clashing with Greek Police, throwing stones, Molotov cocktails and battling with chemicals that Greek riot policemen had used to diffuse the situation.
At some point in the video, an anti-authoritarian lights a Greek flag that had been raised at the entrance of the Polytechnic school on fire using a Molotov cocktail.
During the riot that took place on Holy Tuesday, the masked men wrote slogans on the Greek Parliament’s outer wall, burnt cars and injured two Greek policemen. On their part, police officers made nine arrests.
The images, which have been edited and accompanied by music, concerned Greek government members.
Deputy Citizen Protection Minister Giannis Panousis requested Greek Prime Minister Alexis Tsipras’ intervention in order to address the riots issue, while he even hinted that he may resign if Tsipras does not take any action.
“The Prime Minister must decide which side he wishes to support and which he will leave behind,” he said. Panousis also stressed that the anti-authoritarians want someone to die so that they will be able to repeat the episodes that occurred in 2008 after the death of Alexis Grigoropoulos.