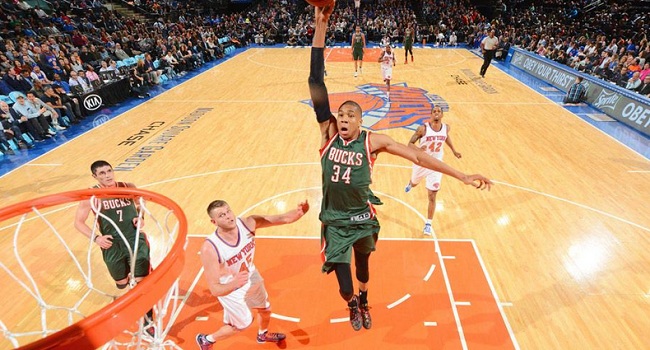 After keeping him on the bench for the whole game against Lebron James’ Cleveland Cavaliers, Jason Kidd let Giannis Antetokounmpo perform his magic in the 99-91 win over the New York Knicks at the Staples Center.

The 20-year-old star scored 23 points and grabbed 9 rebounds as well as 1 assist and 1 block in 31 minutes of play. A dashing response to media reports following the mystery behind Kidd’s decision to keep him in tracksuit pants for the whole game against the Calaviers last Wednesday (104-99 loss).

His coach happily admitted “he had a massive game” since his team needs one more win to clinch a 2015 NBA playoff spot. Milwaukee Bucks now stand in 6th place with a record of 39 wins and 40 losses with just 3 games remaining till the end of the regular season.

Antetokounmpo had the privilege of hosting friends from Greece and in return gave them and the Staples Center’s audience one of the NBA’s Top 10 plays of the day (no2).