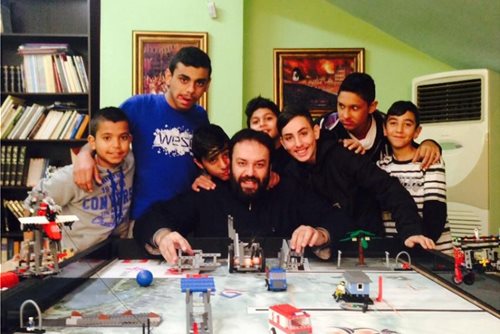 Greek-American Aristoteles Aslidis is attempting to open “a window to the world” for the kids of Faros tou Kosmou, a children protection center in the parishes of Neapolis and Stavroupolis in Thessaloniki, Greece. Aslidis, who resides in New Jersey, USA, has created an IndieGoGo fundraising campaign, aiming to collect 5,000 dollars.

The campaign was launched on March 29 and it will end on May 28. As of now, the campaign has already raised 840 dollars.

Aslidis’ father originated from Thessaloniki, therefore he has been spending his summers in Greece from a young age. A few years ago, he started volunteering for the child protection center Faros tou Kosmou.

According to the campaign description, Aslidis aims to “provide access to computers for the under privileged children of the Dendropotamos community in Thessaloniki, Greece, who -due to a variety of social and economic reasons – are isolated from the rest of the urban area and live under extremely deprived conditions.”

Aslidis wishes to provide technological tools to the young children and help them escape from isolation that could result in delinquent behavior or criminal activity.

On March 5, 2012, Aslidis arrived at the child protection center to offer his help. He cleaned, cooked and served food along with the other volunteers while he also spent time with the children, talking to them and educating them about American sports such as baseball.

The children have a special place in Aslidis’ heart and as he said, he always likes visiting them at least twice a year. They make him feel like a member of their large family.