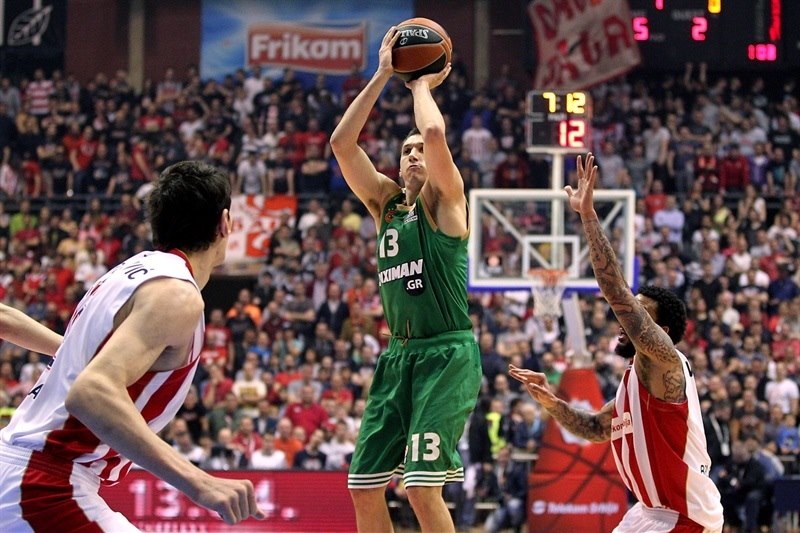 Panathinaikos suffered a 69-68 defeat from Red Star at the Pionir Hall of Belgrade but made the playoffs due to Macabbi Tel Aviv’s victory over Alba Berlin (64-73) fifteen minutes earlier.
Alba’s loss meant that Panathinaikos automatically qualified for the playoffs no matter the score against the Serbians. The news of the result didn’t arrive till the end of the third quarter though, so till that moment, the Greens had no other goal in sight but winning the final fixture of the top 16.
Dusan Ivanonic and his players’ plans were in stake primarily because of Boban Marianovic’s form. He added his 16th double double of the season (all-time record) and reached a total of 256 rebounds (also an all-time record).
The Serbs, who were already disqualified, were in search of a prestigious victory against the Euroleague’s most successful club in the last twenty years, so with the help of their fans, they ended the first period 9 points ahead (16-7). Panathinaikos began to close the gap and with Esteban Batista leading the scoreline (15 points) and Diamantidis organizing the defense, they went ahead at the end of the third quarter (44-45).
The game began to open up and defenses went out the door. Both teams aimed for victory through scoring rather than protecting the basket and in the end it was Red Star Belgrade that proved to be more well-aimed. With 10″ to go, Jenkins went up for a three pointer, made it and got the foul for a +1 too. He missed the free throw but MVP of the night Marianovic grabbed his 16th rebound and another foul with 2.2″ left. He went to the line, made both free throws and the crowd went delirious. With less than 2 seconds to go, captain Diamantidis was unable to find the target in a desperate attempt to win the game.
https://www.youtube.com/watch?v=2nZ8YV6On8E
Following tonight’s loss, Panathinaikos fell in fourth place in Group E (7-7) but will now move to the playoff round where he’ll be challenged against former champions and favorites to lift the trophy this year CSKA Moscow. The Russians, led by Greek coach Dimitris Itoudis, finished on top of their group with the top-16’s best record (12-2).