GRNews
GreekReporter.comGreeceThis Gadget Will Roast Your Easter Lamb By Using Only Your Brain...

This Gadget Will Roast Your Easter Lamb By Using Only Your Brain (Seriously!) 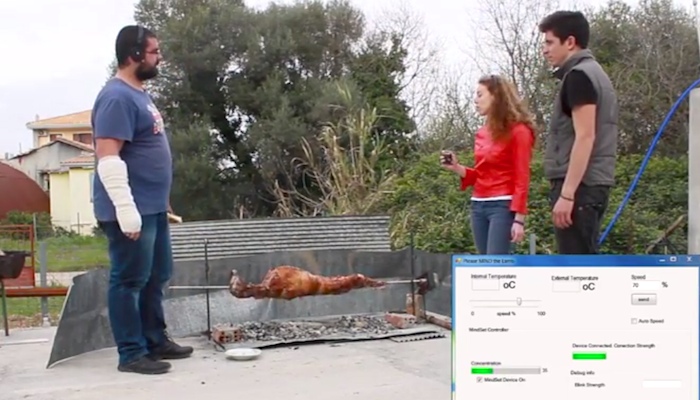 A team of Greek students developed a gadget that will roast your Easter lamb just by using your brain while a computer software translates brain activity into data!
Last year this very same team had invented what we thought was the coolest Greek Easter gadget we had ever seen. Then, they had developed a system to roast a lamb on a spit using one finger to control it, called SouvLEAP. Watch the demo below:


And as we thought Greek Easter couldn’t get any more awesome, this year the team of Greek students and their professor from the Technological University of Ionian Islands on Lefkada Island made the absolute Greek Easter invention: a lamb roaster using electroencephalography (EEG)!
We didn’t believe it either when we were first contacted by the team behind the invention, but we promise this is not an April Fools’ joke. We watched a demonstration and we can assure you that this system configuration works and actually makes Easter even more fun.
Team G(R)EEKZ, as the student-professor team call themselves, managed to literally blow our minds with their wireless system that turns the souvla (spit) by harnessing the brain’s electrical activity.
If you don’t believe us you can see it in action in the video below. The video also combines an anti-bullying message together with a demonstration of the ‘Please Mind The Lamb’ gadget, as the team has named it!

How it works & the people behind “Please Mind The Lamb”
“The wireless headset, a mini wireless EEG, records your brainwaves and translates them into meaningful data you can understand and use to perform certain tasks,” explains Stamatis Dragoumanos the professor behind the unique project!
The EEG measures brain concentration and every blink of the eye sends the data to the power device to turn or stop the roast.
“If we didn’t have this second factor (blink) somebody would literally need to be on top of the lamb,” says Dragoumanos.
“On the other hand if we had used an EEG with more sensors (they actually used an early 2-sensor EEG Dragoumanos bought for his students to use since the school didn’t cheap in the project) we could also translate literally the thought turn or stop.
The team has approached a Greek factory in order to see if there is interest to manufacture the gadget that Dragoumanos estimates will cost between 40 and 50 euros plus the expense for an EEG device.
“It connects via blue-tooth so you would be even able to use it with any device that supports blue-tooth like a mobile phone for example,” says the Greek professor who knows how to make the learning process into a fun experience!
“Because when you think, you can even make a roaster turn,” Dragoumanos points out!
He notes that “key to this year’s success, was just the right use of the brain.”
“The most important thing in the whole process was that, the students learned new things about themselves and the emerging technologies around them, worked under pressure and lead by example for their colleagues,” adds Dragoumanos.
The software engineer added that students who worked on this fun project had the chance to explore the following subjects:
– Human Resources Management
– Design and development of the Software in Arduino and C#
– Design and development of the hardware
– Rapid prototyping
– Estimation of the final product cost
– Optimization of the human-device interaction and device operations
– Development of a marketing plan
– Filming
The project called “Please Mind the Lamb”, was the motive for Dragoumanos’ students to make their eyes shine once again… and he must probably be the coolest professor on the whole island of Lefkada!