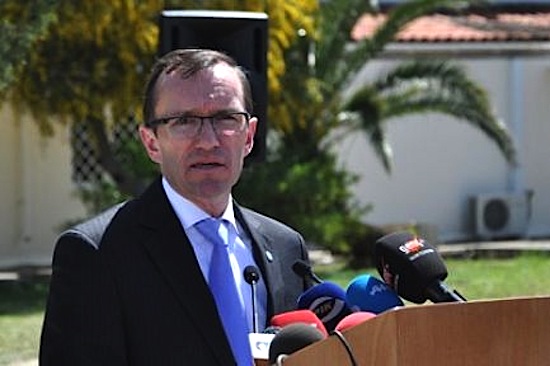 UN Secretary General’s Special Adviser on Cyprus Espen Barth Eide has said that he had good and forward-looking meetings on Wednesday with the negotiators of the two sides in Cyprus, Greek Cypriot Andreas Mavroyiannis and Turkish Cypriot Olgun Ergun.
“Good, forward-looking meetings with both Cyprus negotiators, Andreas Mavroyiannis and OlgunErgun, starting preparations for the resumption of talks,” Eide posted on his twitter account.
The Norwegian diplomat announced on Tuesday in Nicosia, after separate meetings with Cyprus President Nicos Anastasiades and Turkish Cypriot leader Dervis Eroglu, the resumption of peace talks after the illegal elections in the northern Turkish occupied areas of the island.
Athens condemns UN envoy’s remarks on the legal status of Cyprus
Athens has strongly criticized the Special Envoy to the Secretary General of the United Nations in Cyprus, Espen Barth Eide, for statements he made to the Cyprus News Agency (CNA) which the Greek Foreign Ministry sees as shredding doubts over the island’s sovereign rights.
“We recommend that Mr. Eide studies carefully how the international Law of the Sea is applied in practice during the development of hydrocarbon resources in Norway’s Exclusive Economic Zone before he talks about the sovereign rights of the Republic of Cyprus,” Konstantinos Koutras, spokesman of the Greek Foreign Ministry, has said. In an interview to CNA, Eide said some countries do not share the opinion that seismic surveys in a certain country’s Exclusive Economic Zone are necessarily a violation of the relevant UN treaty.
Eide gives clarifications
The UN Secretary General`s Special Advisor for Cyprus, Espen Barth Eide, `has repeatedly underlined that the Republic of Cyprus has exactly the same right to declare an Exclusive Economic Zone as any other sovereign state, and that its rights in this regard should be fully respected by other states’.
This is noted in a statement attributable to the Spokesperson of the United Nations in Cyprus, regarding the interview Eide gave to the Cyprus News Agency.
`The Special Adviser of the Secretary-General (SASG) was interviewed by Cyprus News Agency, related to the positive news that Cyprus talks can soon be restarted.
(source: CNA)