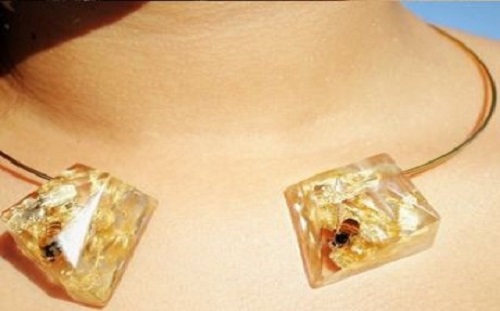 Marina Nikoloulea is a 28-year-old Greek scientist turned artist. Through her love for the environment and her scientific knowledge she has managed to create an original and unique collection of jewelry, entitled Queen Bee.

The Melbourne-based designer completed her education in chemistry and biology a few years back and decided to combine her knowledge with her artistic talent creating beautiful jewelry from bees, gold and resin. According to the young woman, her creations contribute in raising awareness in an effort to protect the environment, and the bee population which faces the threat of extinction.

“If the bees disappear, man will have a maximum of four years left on the planet,” she said in an interview with the Greek Diaspora news website Neos Kosmos. “We owe one third of the food that is on our tables to the bees,” she added.

The bee population is facing the threat of extinction and the young scientist has made it her goal to change this fact.

Her family used to work with bee hives. However, she can’t recall a single time when she was stung by a bee. “If you don’t attack them or scare them they won’t harm you. Even if the land on someone they are not dangerous they are just resting,” she said.

Marina Nikoloulea gathers bees after they die and then places them in resin, which is later passed through sandblasting, in order to make the jewelry.