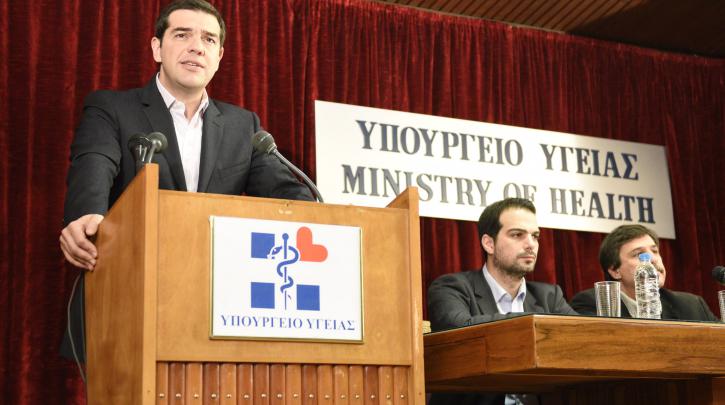 Greek Prime Minister Alexis Tsipras visited the Health Ministry on April 2, announcing that his SYRIZA-led government will improve public health care in the country through the abolition of a compulsory 5-euro fee for treatment and the hiring of some 4,500 specialized staff. Addressing reporters and employees of the Minister, Mr. Tsipras underlined that some of the reforms passed from the Greek Parliament over the past few years, as part of the austerity measures imposed by the memoranda, have damaged the country’s health system. The newly elected leftist government is working to repeal them, he said.

“The national health service had problems before the bailout, but it is obvious that in the last four or five years, the bailout choices and reforms were a nuclear bomb at the foundations of the national health service,” the Greek Premier noted, adding that his government will cancel the “unacceptable” 5-euro treatment fee. “We are already working on interventions to abolish bailout measures that have contributed to the destruction of health service,” Mr. Tsipras explained.

“We want to turn the health sector from a victim of the bailouts, a victim of austerity, into a fundamental right for every resident of this country and we commit to do so at any cost. All citizens, after this terrifying crisis, should have access to healthcare irrespective of whether they have insurance or not,” he concluded.

Greece spends 11 billion euros per year on its public healthcare system. The amount, among the lowest among the the European Union member states, is accounting for about 5% of its state budget, while some 2.5 million Greeks have no health insurance.

Alexis Tsipras was the first Prime Minister to visit the Health Ministry in a period of ten years.