GRNews
GreekReporter.comGreek NewsEconomyYanis Varoufakis: "Greece Will Adopt the Bitcoin If Eurogroup Doesn't Give Us...

Yanis Varoufakis: "Greece Will Adopt the Bitcoin If Eurogroup Doesn't Give Us a Deal" 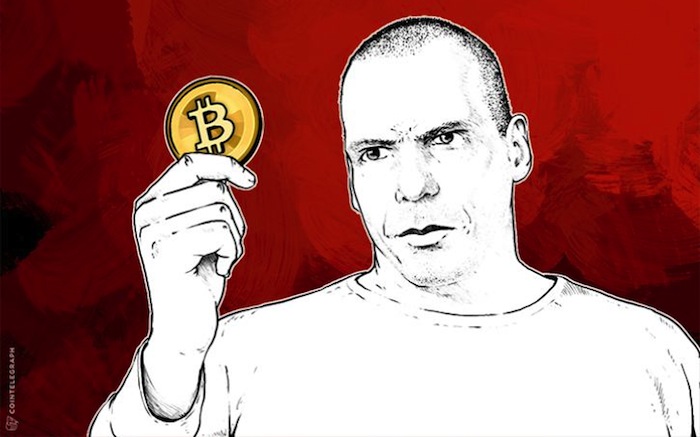 While Greece’s lenders are pushing the Greek government to accept their terms in order to allocate funds so the country will not go bankrupt, Greek Finance Minister Yanis Varoufakis seems to have another ace up his sleeve. The second top thinker in the world according to prospect magazine surprised even his closest aides at a secret meeting when he said “We ‘ve had enough, we ‘ll run on Bitcoin.”
Sources very closed to Greece’s minister of finance told Greek Reporter that today Yanis Varoufakis held a top secret meeting with high-ranking finance ministry officials to prepare them in case negotiations at the upcoming Eurogroup fail. The anonymous source noted that everybody in the room was staring at each other when Varoufakis – also a prominent blogger – said “We ‘ll go to Bitcoin, we will be ahead of all the world economies and although it may be painful in the beginning, Greece’s economy will thrive in the long term.”
The Greek Finance Minister went on to explain what is the cryptocurrency and how it will be implemented into Greeks’ day to day life by using a special mini computerized card with a chip. All citizens will carry the card as an electronic wallet. The card will be distributed for free to all Greek citizens via the local tax offices but it will also be available for purchase at the country’s entry points for 45 euros, or 0,20 Bitcoin each. The sale of the card to tourists is expected to be another form of revenue for cash-strapped Greece.
This is GreekReporter’s 2015 April Fools’ story and the Greek Finance Minister has actually written about the flaws of Bitcoin here. So, no cryptocurrency in Greece, hopefully the country will stay in the Euro. Happy April 1st!
“This is the smartest move to beat corruption and tax evasion, all transactions will be recorded to the Greek Ministry of Finance new secure and dedicated Bitcoin servers and we ‘ll be able to track transanctions at any given moment,” said Varoufakis defending his decision.
Many officials objected saying that Greece doesn’t have the knowhow to start such a global movement but the Greek Finance Minister said that he does what the Ancient Greeks would do in his position – and that is: be the future!
“As Greeks we are innovators, look at our history,” exclaimed Varoufakis who added “The first computer was used in Greece, the mechanism of Antikythira, nobody knew what we were starting then.”
“The future starts in Greece and we will be the first country to use the currency of the future, a currency that doesn’t allow third parties to tell us what to do or how to live, this is the Greek thing to do,” said the Greek minister.
Bitcoin uses peer-to-peer technology to operate with no central authority or banks; managing transactions and the issuing of bitcoins is carried out collectively by the network. Bitcoin is open-source; its design is public, nobody owns or controls Bitcoin and everyone can take part while it can be used for transactions worldwide.
Earlier in the day German Finance Minister Wolfgang Schaeuble had made statements putting down once again Greece’s negotiation efforts and this might have been the reason his Greek counterpart held this important meeting today.
“This is the way to be ahead, they want us to back up and they say we don’t have a clue on what we do, but this is the solution for Greece’s future,” said Varoufakis according to the same high-ranking finance ministry official who was present at the meeting.
Alexis Tsipras, the country’s prime minister who is younger but not as digitally advanced as Varoufakis, was reluctant in the beginning. Tsipras realized the advantages of such a move during a special session the Greek Finance minister held for the Greek Prime Minister at Maximos Mansion during the weekend. The session was also attended by other leftist government members who needed to be prepared and lead the way in using the Bitcoin when and if Greece switches.
According to a source close to the Greek Prime Minster the Finance Ministry is planning to hold free special seminars for all Greek citizens on how to use the Bitcoin. As of today a forum on the Bitcoin and its use has been set up in Greek here.  It is expected that the Greek Economy will be running on Euro and Bitcoin simultaneously at least for one year until all citizens get familiar with the use of the digital currency. You can read more technical details about the currency switch here.
The next crucial Eurogroup for Greece’s future should be held in the next two weeks.
This is GreekReporter’s April Fools’ story and the Greek Finance Minister has actually written about the flaws of Bitcoin here. So, no cryptocurrency in Greece, hopefully the country will stay in the Euro. Happy April 1st!