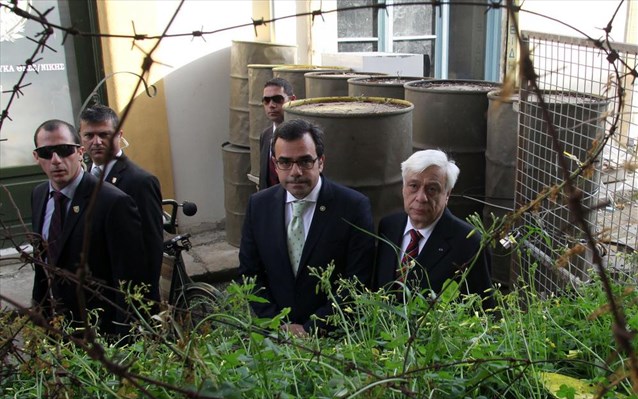 President of the Hellenic Republic Prokopis Pavlopoulos, on his second day in Cyprus, visited the Greek Contingent in Cyprus (ELDYK), in line with the provisions of the 1960 Constitution which established the Republic of Cyprus, as well as the so-called “Green Line” dividing the island’s capital, Nicosia, and met with representatives of various groups and committees.

The newly elected Greek President met with a delegation of the Committee of the Relatives of Missing Persons, while Committee President Nikos Sergides told the press that they briefed Pavlopoulos on the latest developments and he showed great interest, pointing out the need for greater activity in all directions to address the issue. Moreover, the Greek President underlined that all parties involved should sincerely cooperate in order to have positive results soon.

Additionally, Pavlopoulos, who is in his first official visit since he took office on March 13, met with the Pancyprian Refugees Union, members of which briefed him on the issues refugees are currently facing, 41 years after the brutal Turkish military invasion. Union President Andreas Papapolyviou said that they also informed the Greek President about the issue of missing persons and the those living in the Turkish occupied areas. As he noted, Pavlopoulos has a deep knowledge of the Cyprus problem and pledged that he will fight for a just and viable solution. On his behalf, the President of the Occupied Municipalities Union, Alexis Galanos, said that he briefed the Greek President on the Union’s activities in Cyprus and abroad in regards to the Cyprus problem, adding that he exchanged views with Pavlopoulos on future events scheduled to take place in Greece.

Similarly, the President of EOKA Historical Memory Council, Thasos Sofokleous, expressed his deep gratitude to the Greek President for the support and solidarity, and expressed the hope that the Cyprus problem is resolved next time he visits the island. Finally, Karpasia Committee President Nikos Falas also briefed Pavlopoulos on the many problems the enclaved are facing, adding that the Greek leader has extensive knowledge on the matter and the occupied Karpasia Peninsula in general.

The relations between Greece and Cyprus have become even stronger, the newly elected President highlighted yesterday during a meeting with his Cypriot counterpart Nicos Anastasiades.

Cyprus, which is a member of the European Union since 2004, has been violently divided in 1974, after a brutal Turkish invasion and the following occupation of its northern lands or 37% of its territory. On its part, Turkey has repeatedly denied to recognize the Republic of Cyprus, despite calls by international institutions and the European Union, which Ankara aims to join. At the same time, numerous United Nations-backed negotiations to reunite the island under a federal government have failed. In October 2014, President Anastasiades suspended his participation in the peace talks following a Navigational Telex (NAVTEX) issued by Turkey for the conduction of hydrocarbons research in Cyprus’ Exclusive Economic Zone (EEZ) by seismic vessel “Barbaros,” escorted by a number of Turkish Navy ships.