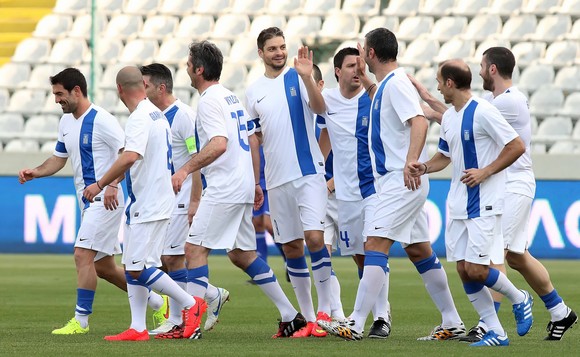 The Euro 2004 Champions, Greece, beat the 2004 national team of Cyprus 6-1 in a friendly match in Nicosia in front of 6.000 fans.
Angelos Charisteas, Giorgos Karagounis, Stelios Giannakopoulos and the rest of the gang that participated in the country’s most remarkable athletic achievement in its history reunited almost eleven years later for one last match.
It was an idea initiated by the member of the European Parliament and former captain of the Greek team Thodoris Zagorakis and the Cypriot equivalent, Eleni Theoharous.
Considering the group’s age, the halves were reduced to just 35 minutes, enough though for the fans to watch a considerably exciting match. In the first half, both teams were trying to reevaluate their skills and fitness, however the were two goals scored from each side.to The score-sheet opened by the golden scorer of the Euro, Angelos Charisteas when he beat Cypriot keeper Panayiotou with a wonderful touch (6′).
Seven minutes later (13′) it was Michalis Konstantinou’s turn, former player of Panathinaikos and Olympiakos, to level the score after a one-on-one with ex-teammate Antonis Nikopolidis.
Seeing that the team was a little beat up, head-coach Otto Rehhagel brought in the younger and fresher Pantelis Kafes (57′) and Vasilis Lakis (61′), who with the help of Giorgos Karagounis (38′) and Stelios Giannakopoulos (40′, 55′) scored the following 5 goals of the game.
The Greek national team of 2004 consisted of: Nikopolidis, Basinas, Goumas, Dellas, Dabizas, Seitaridis, Karagounis, Kapsis, Nikolaidis, Giannakopoulos, Fyssas, Chalkias, Venetidis, Charisteas, Zagorakis, Lakis, Katergiannakis, Kafes, Georgiadis and Vryzas.