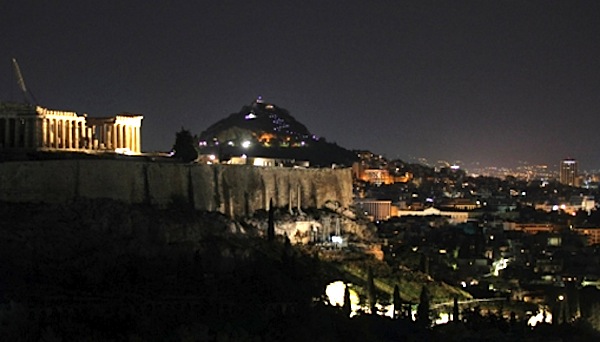 Greece participated in the worldwide Earth Hour movement with an hour of darkness at landmark sites across the country on Saturday evening in a move to raise public awareness on climate change.
From the Sacred Rock of the Acropolis hill in downtown Athens to Eleftherios Venizelos international airport, lights were symbolically switched off between 8.30 p.m. and 9.30 p.m. local time, showing Greece’s commitment to live sustainably and care for the planet.
The ancient Temple of Parthenon in the Acropolis hill went dark, while lighting in the western runway system of the Athens’ airport was turned off for a few minutes.
For the seventh year in a row, thousands of citizens, communities, hotels, businesses and organizations in Greece took part in the Earth Hour that began in Australia in 2007.
(source: Xinhua)

Aristodemus: The Only Survivor of Sparta’s 300 Died a Hero