GRNews
GreekReporter.comGreeceFines up to €25 Million Introduced in New Sports Bill

Fines up to €25 Million Introduced in New Sports Bill 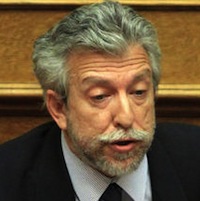 In an effort to diminish violence in sports, a number of significant suggestions are to be part of the new sports bill presented by Greek Deputy Sports Minister Stavros Kontonis yesterday.
According to ideas that will soon be discussed in court, the Ministry will have the power to either impose colossal fines or proceed to heavy penalties.
The government’s role intensifies as the Deputy Sports Minister will now be able to call off championship games, forbid the presence of fans, deny entry of teams to European Cups and even call off the whole championship.
In case the above punishments are not met by the clubs, he then will have the permission to enforce fines up to €25 million.
Apart from the above, smaller yet still important concepts are to be discussed. For example, fines will also be served to the ever-growing Greek media when they are caught encouraging incidents of hooliganism. Furthermore, from the following season, no club will be able to participate in the championship if it is unable to print e-tickets or install cameras in their home grounds. Last but not least, any fan club that is illegally standing, will no longer be supplied tickets for its members.