President Anastasiades: Efforts for a Cyprus Solution Continue With Determination and Sincerity 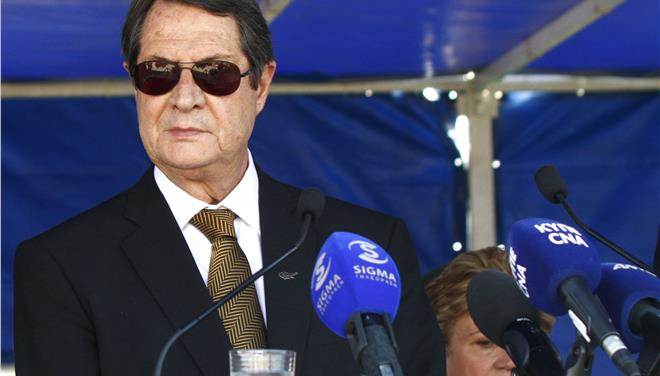 President of the Republic of Cyprus Nicos Anastasiades has stressed the government’s will to continue its efforts for a permanent settlement on the Cyprus problem, caused by the 1974 Turkish military invasion on the island, with sincerity, determination and boldness. Moreover, he underlined the need of a peaceful settlement that will give the chance to establish a modern European state and provide both Greek and Turkish Cypriots the opportunity to co-exist in harmony.
Anastasiades, who was speaking during a ceremony on the occasion of the 60th anniversary of Cyprus’ 1955-1959 anti-colonial struggle, said that the Cyprus problem remains the primary national challenge, noting that the solution must be given within conditions of security, democracy, by safeguarding human rights and making sure that there is no danger of repeated events that took place in the past due to the Turkish stance. Additionally, the Cypriot President underlined that the international community and the European Union are making efforts for a Cyprus settlement and that the relations between the island and the United States have been strengthened. Finally, he referred to his recent visit to Moscow, which proved, as he said, that no member of the international community is ignored by Cyprus.
Referring to the Turkish side, he said that its intransigence has not allowed for a fruitful dialogue on the Cyprus problem over the last two years. Regarding his decision to withdraw from the United Nations-backed negotiations after the Turkish provocations in the island’s Exclusive Economic Zone (EEZ), he explained that it was inconceivable for him to continue this dialogue under the threat of Turkish military weapons, battle ships or army.
Concluding, he noted that the decision for dialogue and a peaceful settlement of the Cyprus problem has been something indispensable, while calling the Turkish side for the withdrawal of seismic vessel “Barbaros” and the international community to exert more pressure on Ankara.
Cyprus, which is a member of the European Union since 2004, has been violently divided in 1974, after a brutal Turkish invasion and the following occupation of its northern lands or 37% of its territory. On its part, Turkey has repeatedly denied to recognize the Republic of Cyprus, despite calls by international institutions and the European Union, which Ankara aims to join. At the same time, numerous United Nations-backed negotiations to reunite the island under a federal government have failed. In October 2014, President Anastasiades suspended his participation in the peace talks following a Navigational Telex (NAVTEX) issued by Turkey for the conduction of hydrocarbons research in Cyprus’ EEZ by seismic vessel “Barbaros,” escorted by a number of Turkish Navy ships.