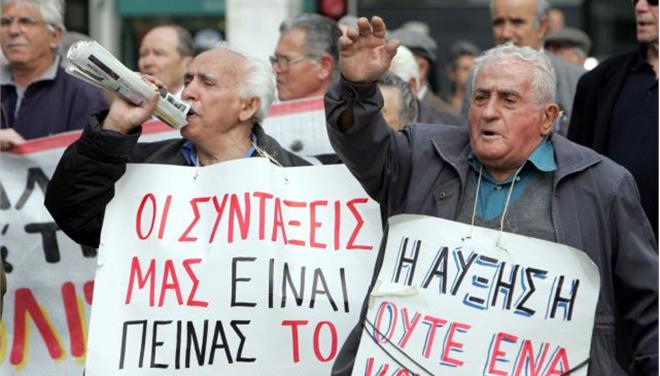 It was revealed that 44.8% of Greek pensioners live below the poverty line with pensions that do not exceed 665 euros.
Furthermore, the vast majority disability of pensions amount to 250-540 euros, while finally 60% of pensioners in all categories (retirement, death, and disability) receive up to 800 euros with the final amount hardly reaching 700 euros after the relevant deductions.
Other data that show the actual pension system situation in relation to benefits for pensioners, are:
• 85.6% of pensioners are over 61 years old.
• Old-age pensions – individuals over 61 years-amounts to 89.4%.
• The total number of pensioners in the country amounts to 2,654,784, decreased by 2,865 pensioners compared to the previous month.
• In March a total of 2.3 billion euros was paid in pensions.
• 1,286,180 million pensioners receive only one pension, while 954,322 receive two pensions and 334,914 pensioners receive three pensions.
• Four Greek pensioners who receive pensions from 10 different funds and 7 Greek pensioners who receive 9 different pensions.
The data above reveals the false information that was given to Greece’s lenders from the previous governments in order to achieve a reduction in wages and pensions.