New Democracy Leader: 'The Government is Lying to Greek People' 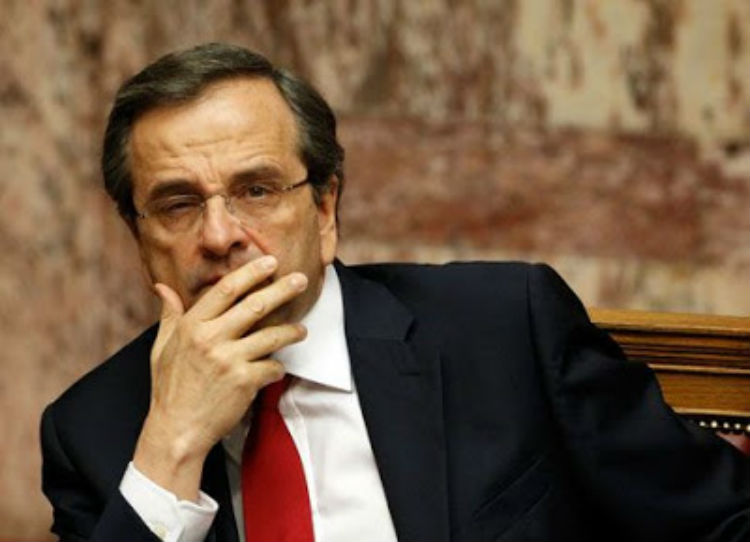 New Democracy leader Antonis Samaras lashed out at the government on Thursday, urging it to stop lying to the Greek people and delaying the implementation of the February 20 agreement. Samaras released the agreement document, which has the signature of Finance Minister Yanis Varoufakis.
“The government for one and a half month has not dared bring the extension of the loan agreement it signed to the Parliament, as it is afraid of the voting in Parliament, of SYRIZA and Independent Greeks parliamentary groups, and mainly because it does not want the Greek people to find out the truth. However, a lie has no legs. We publish the document so that each Greek citizen can look it up and draw his own conclusions.
The contract is the modification of the Master Financial Assistance Facility Agreement so as to get a four-month extension, just like our government did in December to get a two-month extension. Both are inextricably linked to the Memorandum. Therefore, the government did not tear the Memorandum apart but co-signed it. However, our government was terminating it, along with the Memorandum. The new extension of the contract equals an extension of the Memorandum as well.
The fact that the Memorandum is extended is also confirmed by the rest of the Troika, by the ECB and IMF announcements; and they shouldn’t tell us that they cannot read the texts. The two texts are identical, apart from one point that includes the return of 10.2 billion euros. The 1.2 billion euros, which the government should not have returned and is now asking back to cover cash needs, are part of this amount. Up until last month, the government assured it did not need the 7.2-billion-euro tranche, while it is now anxious to disburse any amount to limit the domestic default in payments.”
“All that is part of the supposedly tough negotiation that the government had” and called on it to put any communication tricks aside. “Creative ambiguity equals lies within the country. Let the government stop any procrastination and delays, and implement what it signed on February 20 because each day that goes by, the economy collapses and the cost on society increases,” Samaras concluded.
New Democracy Deputy Christos Staikouras released the agreement document, claiming the texts of the two updated contracts are identical.
(Source: ANA-MPA)

Greece started the the free distribution of Covid-19 self-tests by pharmacies, exclusively to high school students aged 16-18 and teachers.
Diaspora