GRNews
GreekReporter.comGreeceThe Great Powers Were Afraid of the 1821 Greek Revolution

The Great Powers Were Afraid of the 1821 Greek Revolution 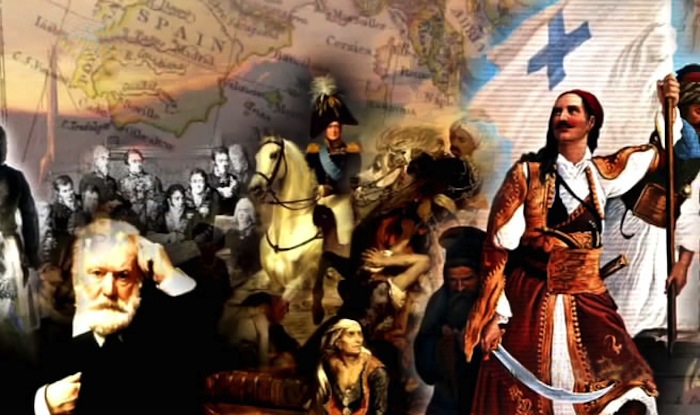 The Great Powers of Europe are currently stressing over the shift in Greek negotiations or a possible Grexit that will have negative results for all parties involved. However, this is not the first time that Greece has been the reason behind the Great Powers’ fear.
The 1821 Greek Revolution erupted under unfavorable omens, seven years after Waterloo, Europe was being shaken by riots that threatened its monarchy regimes. And while the repression of these movements did not seem difficult for the powerful European autocracies, the Greek Revolution was a cause for concern since it threatened Europe’s coveted balance.
The reasons why Greece was viewed as a special case among the revolutionary movements of the time was firstly due to the fact that Greece constitutes a bridge between Europe and Asia, and secondly because the change of the status quo after the dissolution of the Ottoman Empire created a new and unforeseen dynamic in the area.
Foreign policy issues, national interests and complex diplomatic calculations rallied the Great Powers against the Greek Revolution. Meanwhile, the Great Powers were also attempting to stop the Russians from descending to the Mediterranean, which was a real threat since it was believed that the Russians were aiding the Greeks in their attempt to revolt.
England
In 1822, the French Consul in Thessaloniki wrote a detailed letter to the French Ministry of Foreign Affairs explaining the reasons that led England to be hostile against the Greek uprising. In fact, England was afraid of Greece’s naval power, recognizing a strong opponent that should be drowned in its cradle.
France
Even though France was a rival of England, it did not show a favorable attitude toward the rebellious Greeks from the beginning. The fear that Russians would be able to reach the Mediterranean, along with the country’s commercial competitiveness with the Greek navy, which brought Greek merchants in every Ottoman East market, were both significant reasons to remain hostile against the Greek effort for independence.
Austria
Austria’s stance against Greece came as no surprise. Chancellor Metternich’s domestic and foreign policy was to drown any idea of overthrowing the country’s regime and oppression of the people. The Greek Revolution constituted a dangerous example because it could lead to a rebellion of other enslaved people, not excluding the residents of Austria.
Russia
Russia appeared to be the protector of Greece, however, influenced by Metternich, Russia denounced Ypsilantis’ movement. However, the constant Russian-Turkish dispute that, with the explosion of the Greek Revolution, led Russia to war against Turkey was an encouraging factor for Balkan people.
USA
The United States of America had adopted a pro-Turkish policy, committed to the Monroe doctrine, despite the official support of the Greek independence efforts, the U.S. remained apathetic and uninvolved in order to finally sign a trade agreement with Turkey. The Americans’ philhellenism was documented by various sources, however, it was mostly expressed by the people and not the state.