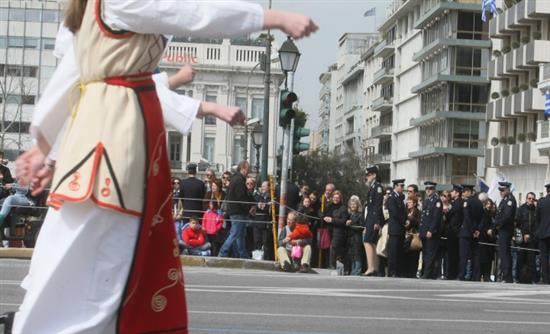 The Greek Independence Day Student Parade took place in Syntagma, downtown Athens, on March 24, in the presence of Greek officials and a large crowd that was not held back by barriers, as it used to be in previous years. The students marched before the Unknown Soldier, turning their heads to honor the monument.
This year, the presence of police was discreet, while the barriers that separated the crowd from the officials were gone. A total of 1878 Greek students from 313 Athenian schools participated in the parade for the March 25 anniversary of the Greek Independence Day.
Students from 174 primary, 72 middle schools and 67 high schools marched to the sounds of the Athens band and, as every year, the parade was led by students from Kalavryta High School, wearing traditional costumes and carrying a banner from the 1821 War of Independence.
Furthermore, Greek Scouts and Special Olympics athlete delegations also participated in this year’s student parade.
Just before the parade began, Greek Education Minister Aristidis Baltas laid a wreath at the Unknown Soldier monument, along with Athens Mayor Giorgos Kaminis and Parliament Dean Giorgos Pantzas.
“Today is a day of remembrance, a day of commemoration and history. It is a day for all the generations that made Greece a free and democratic country and a day of celebration for the new generation, for the children, their parents, their teachers and anyone who helps the younger generation become worthy of previous generations and even surpass them,” said the Greek Education Minister.
“We must invest in education and the new generation. We must invest in good schools, competitive universities, as well as the promotion of science and innovation. Because it is the only way that we will avoid repeating the mistakes of the past,” noted Kaminis.