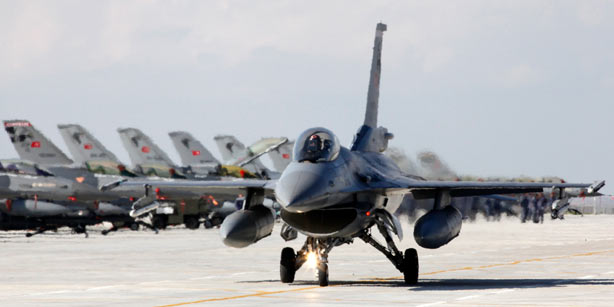 The Turkish Air Force has proceeded to yet another provocation earlier this morning, by repeatedly violating the Athens FIR. A formation of six Turkish F-16 fighter jets entered the Athens FIR at 11:04 a.m. The aircraft flew over Anthropophagi island of Fourni complex in northeastern Aegean for several minutes.

According to a Hellenic Army General Staff announcement issued minutes after the incident, the formation of six Turkish F-16 entered the Athens FIR between the Aegean islands of Lesvos and Chios, and then split in four and two aircraft. The first formation flew at 25,000 feet and the other one at 12,000 feet. The fighter jets exited the Athens FIR at 11:30 a.m. south of Samos island.

All Turkish aircraft were recognized and intercepted by Hellenic Air Force fighter jets, according to international laws of engagement.

The new provocation from Ankara comes only a few days after a gunboat, taking part in the Turkish Navy scheduled training program for the first quarter of 2015, entered the Greek territorial waters off the island of Agathonisi in the Eastern Aegean. The Turkish Navy entered the Greek waters at around 8:55 p.m. and remained stationary for several minutes. Later, it initially sailed west and then, while changing course to southeast, it exited the Greek territorial waters at 11:50 p.m. The incident took place on Friday.