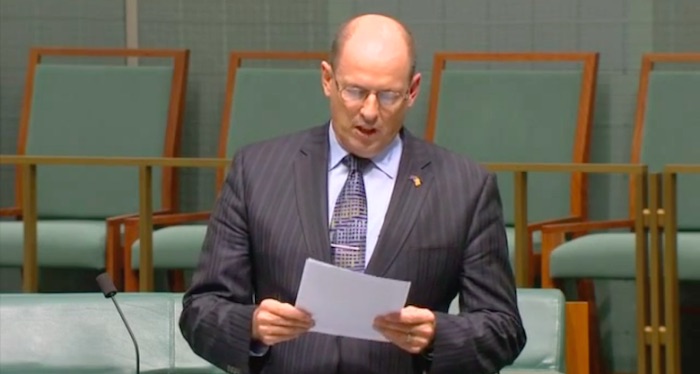 Liberal Party Federal Member for Cowan, Luke Simpkins MP during his speech in the Australian Parliament in Canberra on 17 March 2015 urged his colleagues in Government, for Australia to recognize FYROM as the Republic of Macedonia which is its Constitutional name.

“Another 150 nations including the United States, United Kingdom and Canada have already done so,” said the Australian MP but he forgot to mention that Macedonia is a Greek name that has existed for thousands of years before FYROM’s inception.

He claims that only a handful of Greek Australians would have a problem with this and that “most Australians of Greek heritage have bigger issues in their lives than this” to worry about.

“Of course there are a handful of Australians of Greek heritage that do contact MPs talking about how many votes would be lost by whoever made such a change, but it remains a handful and despite the talking, there are not enough people that would vote only on this issue to affect the result in a single electorate.”

Watch his speech below:

“So far Australia has taken a biased position and through our unwillingness to seek progress, we are helping to hurt the economy of a small nation in Europe. The Greek Government wants instability in the region and our support of one side aids them,” said MP Luke Simpkins.

Macedonia is a Greek name that has designated the northern area of Greece for 2,500 years. In 1944, the name of the Skopje region was changed to Macedonia as part of Tito’s imperialist campaign to gain control of the Greek province of Macedonia.

The name dispute between the two countries has rumbled on since Macedonia gained independence from Yugoslavia in 1991 leading to a U.N. accord signed by both parties four years later.

The disagreement centers around the use of the name Macedonia as well as symbols and figures used by the FYROM.

As millions of ethnic Greeks identify themselves as Macedonians, unrelated to the Slavic people who are associated with the Republic of Macedonia, Greece further objects to the use of the term “Macedonian” for the neighboring country’s largest ethnic group and its language.

The Republic of Macedonia is accused of appropriating symbols and figures that are historically considered part of Greek culture such as the Vergina Sun and Alexander the Great, and of promoting the irredentist concept of a United Macedonia, which involves territorial claims on Greece, Bulgaria, Albania, and Serbia.

Several Greek Australians that wrote to Greek Reporter have advised to contact MP Luke Simpkins demanding a retraction of his statement.