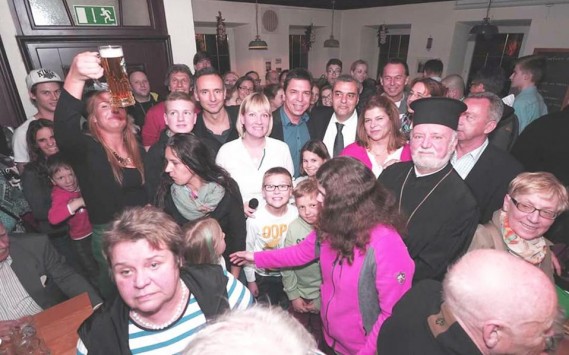 The Mayor and citizens of Kirchseeon in Germany joined together to support the owners of a Greek restaurant who have been receiving threatening racist letters and phone calls.

Athos restaurant is located in Kirchseeon, a town 35 kilometers outside Munich. It opened three years ago by Greek migrants from Thessaloniki. Lately, the owners have been receiving hate letters and abusive phone calls.

Relations between the two countries have soured in the past two weeks as Germany exerted pressure on Greece to proceed to reforms required to complete the country’s bailout. Greece, on the other hand, brought again the issue of World War II reparations from Germany. Also, the two countries’ Finance Ministers have exchanged acrimonious words during the negotiations on the Greek debt.

A series of articles published in the last two weeks by populist German newspapers have created a negative climate for Greeks living in Germany. Restaurants have been an easy target.

Elsa Athanasiou, owner of Athos, complained to authorities that she has started receiving letters and phone calls saying things like “Go back to your stinking country!” or “Pigs, go home!”

Athanasiou turned to a friend who is involved in the local community and they started an internet campaign in order to protect their business. Messages of support started arriving by the hundreds so leading newspapers and websites in Bavaria picked up the story.

On Thursday evening, more than a hundred residents of Kirchseeon led by Mayor Udo Ockel gathered at the restaurant to show their support and “protect” Athos. Athanasiou said that “we have the love of the people who spontaneously came to support us. I’m afraid if we faced a similar situation in Greece, we wouldn’t have this kind of support.”