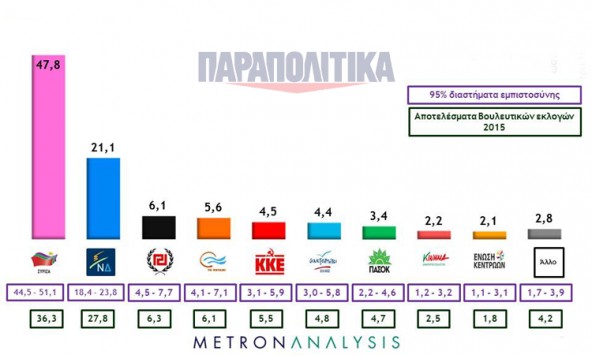 Despite the recent impasse in negotiations between the SYRIZA government and lenders that brought threats of a Grexit, Greek people show their trust to the leftist party as 47.8 percent of them would vote for them if elections were held tomorrow.
The survey conducted by Metron Analysis for weekend newspaper Parapolitika shows SYRIZA leading the race with a difference that is more than double than second New Democracy. SYRIZA is at 47.8 percent and the previous ruling party is at 21.1 percent. This means that SYRIZA won 11 extra percentage points over the opposition party and New Democracy lost almost 7 points.
Third party is again the extreme rightist nationalists of Golden Dawn at 6.1 percent followed by The River at 5.6 percent. The Greek Communist Party would get 4.5 percent of the vote, Junior coalition partners Independent Greeks (ANEL) would get 4.4 percent, PASOK would get 3.4 percent and the Socialist Democrats Movement of George Papandreou 2.2 percent.
The vast majority of Greeks are in favor of the common European currency with 84 percent saying that they prefer the euro, while only 13 percent would like a return to the drachma. This is a little contradictory since there is a significant number of SYRIZA MPs who have openly stated that they would like to see Greece leaving the euro zone and return to the drachma.
Regarding debt negotiations, 60 percent of Greeks believe that it is the euro zone that should back down, 20 percent believe that Greece should back down, while 18 percent of participants said that the two sides should compromise.
When asked if a compromise is possible, 80 percent of Greeks are optimistic that there will be a solution that would satisfy both sides, while 17 percent said that there won’t be a solution.