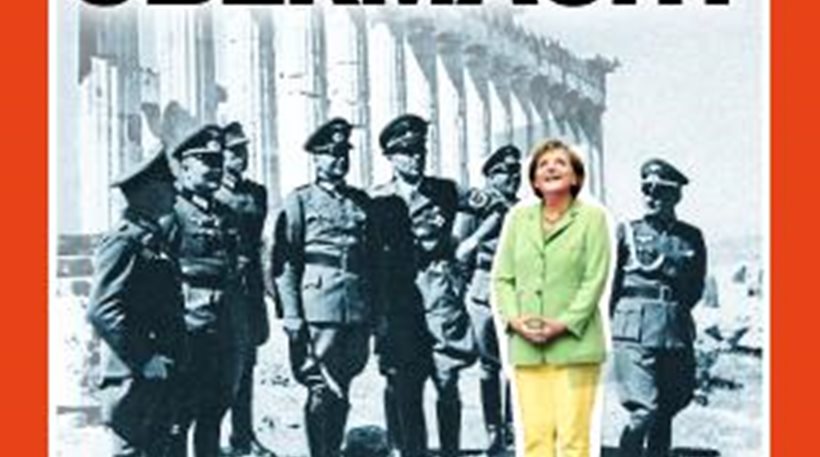 The latest issue of German magazine Der Spiegel features a controversial cover juxtaposing Chancellor Angela Merkel with a group of Nazi officers standing in front of the Parthenon in an old black and white picture taken during Germany’s occupation of Greece.
The title of the feature is “How Europeans View Germans: The German Superpower.” In light of the recent acrimonious exchanges between, mainly, the finance ministers of the two countries and the return of the issue of German war reparations, the Greek public reacted to the cover.
The article, of course, does not equate Angela Merkel to the Nazi forces of the past. It is a report on how people in Europe view the German superpower of today, as Germany appears as the unofficial leader of the European Union.
There is mention of the Fourth Reich in the article, while there is a picture of a graffiti of Merkel sporting a Hitler mustache. According to Der Spiegel there are countries in Europe where people make comparisons between Germany’s political influence in the EU today and the Nazi regime of the past.
In Greece, such comparisons have thrived in the past two months as many Greeks view the German Chancellor as the ruthless ruler who doesn’t back down on the country’s request for financial aid. Several newspapers have published cartoons and editorials depicting Mrs. Merkel and finance minister Wolfgang Schaeuble as Nazi figures.
Yet, the magazine article says that Germany has returned as a power, but not as big and forceful as many Europeans believe.