GRNews
GreekReporter.comGreeceU.S. Assistant Secretary Nuland: "We want to see prosperity and growth in...

U.S. Assistant Secretary Nuland: "We want to see prosperity and growth in Greece" 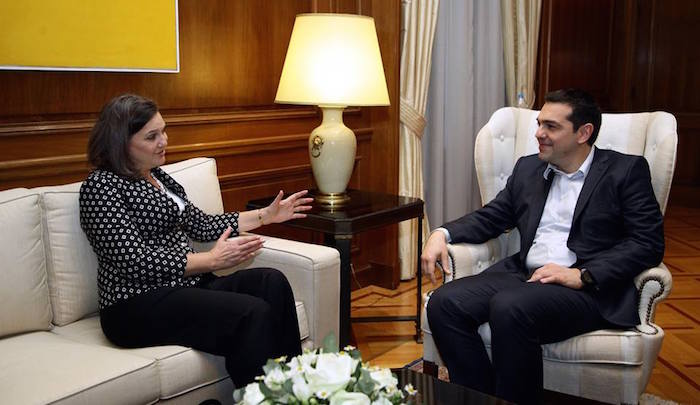 On March 17, Assistant Secretary of State for European and Eurasian Affairs Victoria Nuland visited Athens to meet with senior Greek government officials.
Assistant Secretary Nuland noted that the United States wants to see Greece emerge from its economic crisis stronger and more stable. She stressed that the United States wants to see prosperity and growth in Greece, and to see Greece “able to make a good deal with the institutions.”
During her visit she also discussed security and defense issues, Ukraine, the anti-ISIL coalition, and energy issues. On the crisis in Ukraine, Assistant Secretary Nuland said that the United States and the European Union have had to impose sanctions on Russia because of the increasing rounds of aggression in eastern Ukraine. She added, however, that the United States is “very gratified that we’ve had solidarity between the EU and the U.S., and that Greece has played its role in helping to build consensus.”
Following her visit to Greece, Assistant Secretary will travel to Ljubljana, Slovenia and Rome, Italy to meet with senior government officials to discuss the range of bilateral, regional, and global issues. Assistant Secretary Nuland will then travel to Brussels, Belgium to meet with NATO leaders and senior European Union officials, including members of the European Commission, to discuss the broad range of global and regional issues. She will also participate in the German Marshall Fund’s annual Brussels Forum.