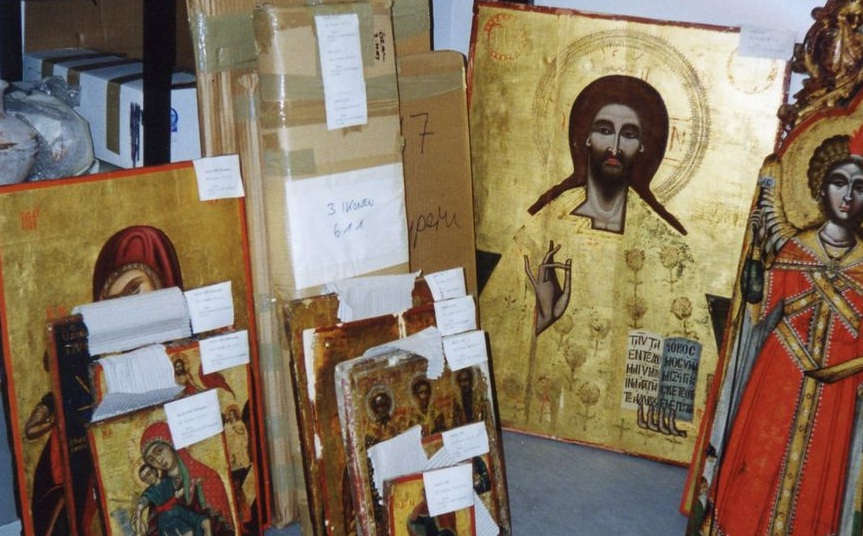 The Cyprus Law Office on the case of Turkish smuggler Aydin Dikmen, has announced the authorities have recovered a total of 207 treasures stolen from the Turkish occupied areas of the island. Specifically, according to a press release, 34 of the stolen items were discovered by the German police in the smuggler’s Munich apartment in 1997 and after a local court of appeals decision they will be returned to Cyprus within a month, while 173 treasures have already been repatriated.

As the Republic of Cyprus Law Office explained, these 34 relics were the most important ones, including fragments of church wall paintings, icons, a hand written manuscript of an 18th century gospel of the Armenian community of Cyprus and 10 prehistoric antiquities. Moreover, the German court ruled that some 49 items (icons of Russian styled art and prehistoric antiquities) should be returned to the Turkish smuggler since it found their documentation to be inadequate. The Cypriot Law Office noted that these will not be returned to Dikmen since they are expected to be put up for auction by the Republic of Cyprus. Dikmen owes the Republic more than 500,000 euros for legal expenses.

Aydin Dikmen is a Munich-based Turkish art smuggler who channeled the items taken from the occupied areas through Turkey, to the whole world. One of the biggest cases of illicit trading in antiquities involving the Turkish national was the plundering of the wall paintings from the Agios Euphemianus church and the 6th century wall mosaics from the Panagia Kanakaria church located in the occupied areas of Cyprus. The number of treasures the German police uncovered was astonishing since the discovered items found were from roughly fifty looted churches in Turkish-occupied territories.

A record number, over 700, sea turtles died in Greece in 2020, according to a report published by ARCHELON.
Archaeology