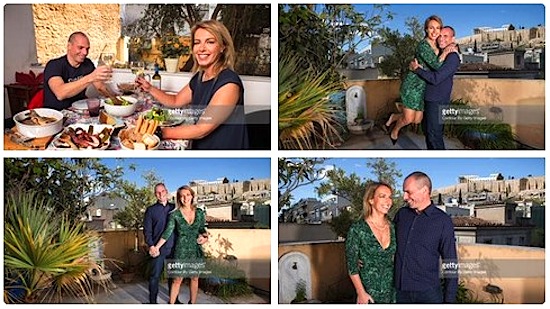 Greek Finance Minister Yanis Varoufakis appears to have regretted a celebrity style photo shoot he recently did with his wife for the French magazine Paris Match. The photos lit the social media on fire and in an interview with the Greek Alpha TV Mr. Varoufakis said “I wish that shoot had not taken place, I regret it,” adding that he did “not agree with the aesthetic” of the photos.
The Greek Finance Minister was shot by the French magazine in various poses, including one playing the piano in his living room, and dining with his wife on the roof terrace of his “love nest at the foot of the Acropolis.”
As expected, the photo — unusual for a Greek official — caused a wave of reactions on the social media, while many heavily criticized his choice, due to his past public statements for a thriftier model of life and governance. The Greek coalition government has also described the country’s financial plight as a humanitarian crisis. Moreover, despite his objections on the outcome, the Greek economy “Czar” argued that the publication “did a lot of good to Greece in France.”
Mr. Varoufakis also took aim at the German tabloid Bild for repeatedly targeting Greece, the SYRIZA-led government as well as him personally, claiming that he will soon be dismissed from the government. “It is an honor to have Bild trying to undermine me. The more they do it, the better I sleep at night,” he said on state news agency ANA-MPA.