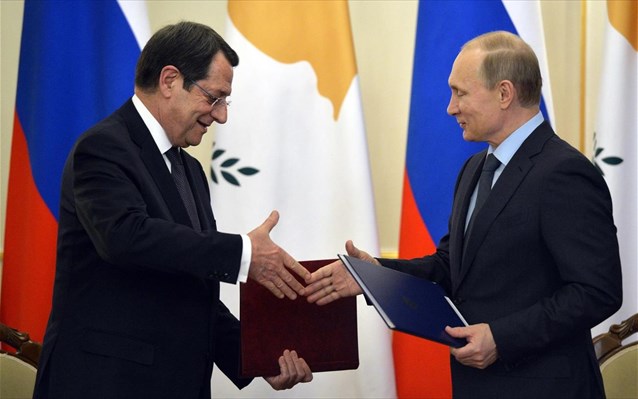 Cypriot Parliament President Yannakis Omirou commented on the reaction of both the United States and the United Kingdom regarding President Nicos Anastasiades’ latest official visit to Russia, where he held talks with his counterpart Vladimir Putin, signing a number of important bilateral agreements. As Omirou explained, the two countries’ reaction was “unjustified.”

The Cypriot Parliament President stressed that the two countries cannot ask of Nicosia not to have other allies, especially when their stance on the long-standing Cyprus problem is not in accordance with international law. As he said, both the Foreign Office and State Department reactions were “completely unjustified.”

The eight agreements singed between Russia and Cyprus, and especially the one allowing Russian navy ships to use Cypriot ports, caused London’s concern, Cyprus News Agency reported. “Our basic position is that this is a Cypriot matter. It is however set in the context of our current concern regarding Russia’s policy over Ukraine,” an unnamed Foreign Office official stated. At the same time, London stressed that the European Union’s position on Russia is clear. “We acknowledge the unity that Cyprus has demonstrated with the European Union on this,” the same source said, adding though, that “in light of the current problems, it is not the time to extend a hand of friendship to Russia until it shows willingness to fulfill the Minsk Agreement.”

Similarly, US Department of State Deputy spokeswoman Marie Harf, asked lately to comment on the bilateral relations of Cyprus and Russia, and the agreements the two countries have recently signed during President Anastasiades’ official visit to Moscow, said this is not the time for “business as usual with Russia.” As she highlighted, Washington has repeatedly stressed to its European allies and partners the importance of unity and of pressing Russia to stop being involved in the Ukrainian Crisis. “That is certainly something we feel very strongly about,” she stated.

This stance, Omirou underlined yesterday while addressing journalists, does not condemn Turkey’s continuous illegal behavior in Cyprus, adding that he is referring to both the 1974 military occupation of the island’s northern third and Ankara’s recent violations of the Republic of Cyprus’ Exclusive Economic Zone (EEZ). In October 2014, the Cypriot President suspended his participation in the United Nations-backed peace talks following a Navigational Telex (NAVTEX) issued by Turkey for the conduction of hydrocarbons research in the island’s EEZ by seismic vessel “Barbaros,” escorted by a number of Turkish Navy ships.

In what is seen as a new attempt to warm up the relations between the two sides, United Nations Secretary General Adviser on Cyprus Espen Barth Eide is scheduled to visit the island on March 16 in order to hold meetings with Republic of Cyprus officials and representatives of the illegal Turkish-Cypriot entity.

Moreover, Omirou revealed that he also expressed his deep concern over the management of the former Cyprus Popular Bank (Laiki), which was wound down after the country received an international bailout in March 2013. It should be noted that the management of the bank’s assets is currently under the scrutiny of the Parliamentary Committee on Ethics after Special Administrator Andri Antoniadou tendered her resignation.