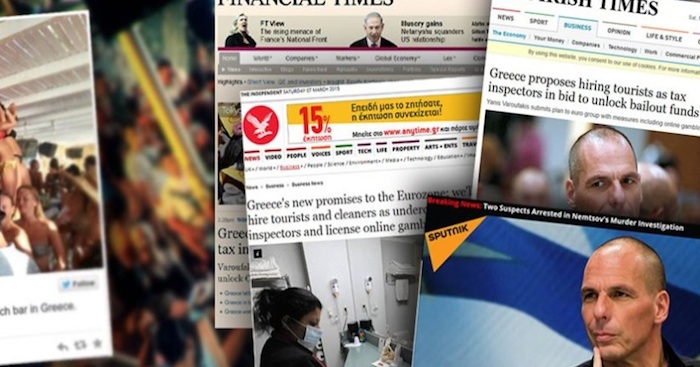 The international Press and social media have met with scorn Greece’s proposal to use undercover non-professional tax inspectors in order to fight tax evasion.

Greek Finance Minister Yanis Varoufakis proposed that “students, housekeepers and even tourists” could be employed at an hourly basis to tackle tax evasion.

In the letter sent to Eurogroup President Jeroen Dijsselbloem it is stated that “the large number of non-professional inspectors are hired on a strictly short-term, casual basis (no longer than two months, and without any prospect of being rehired) to pose, after some basic training, as customers, on behalf of tax authorities, while wired for sound and video. The new recruits, including tourists in popular destinations ‘ripe with tax evasion‘ would be paid by the hour and would be hard to detect by offending tax dodgers. The very ‘news’ that thousands of casual ‘onlookers’ are everywhere, bearing audio and video recording equipment on behalf of tax authorities has the capacity to shift attitudes very quickly.”

The proposal is one of seven reforms described in an attachment to the letter sent ahead of Monday’s crucial Eurogroup.

In another tweet that circulates, there is a picture of women in bikinis dancing at a beach bar where social media users are to guess which one is the undercover tax inspector.