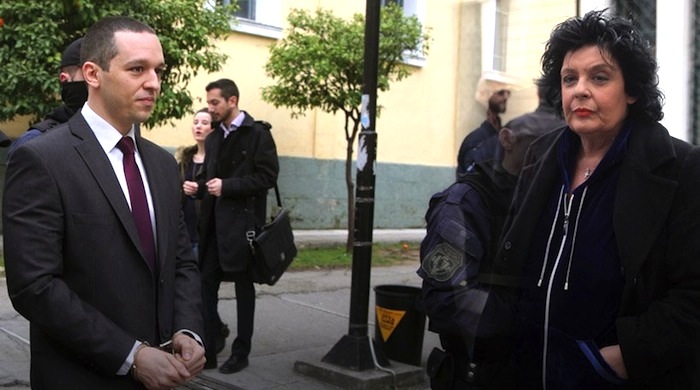 From grievous to simple bodily harm converted an Athens court the charges against extreme right Golden Dawn MP Ilias Kasidiaris for the attack against Greek Communist Party (KKE) MP Liana Kanelli that took place during a live TV show panel in Greece on Thursday, June 7, 2012. Thus, Kassidiraris’ prosecution has ended for this case, as according to the public prosecutor, the victim should have submitted a complaint, something that Kanelli did not do.
The presiding judge described Kasidiaris’ behavior as “unacceptable.” “You had to ask for an apology,” she said, adding that the court shall not judge influenced by the surrounding climate but based on real facts. “The offense you committed was simple bodily harm and the persecution against you is ceased,” she concluded.
On her behalf, Kanelli told the court that she “was punched four times in the face” and that she tried not to fall down “to avoid embarrassment.” She further explained that she did not file a complaint against Kasidiaris because “that act in itself is humiliating.” During her testimony, Golden Dawn supporters yelled slogans against her and caused a fuss.
While exiting the court, the KKE MP underlined that the words “not guilty” were not heard, highlighting that “the Greek people must understand what the real goals of Golden Dawn are.” Furthermore, she referred to the necessity of Golden Dawn’s “political condemnation.”
It is reminded that before slapping and attacking Kanelli, the neo-Nazi Golden Dawn party MP threw a glass of water at SYRIZA MP Rena Dourou (today a governor of Attica Perfecture). Kasidiaris became really upset after Dourou made reference to a court case pending against him.
Kassidiaris is currently being held under custody, along with other Golden Dawn MPs and party leader Nikos Michaloliakos, facing charges over running and belonging to a criminal organization, as well as other serious criminal offences.
In his 700-page argument, the prosecutor handling the criminal investigation of Golden Dawn, proposed that a total of 70 party members, amongst them its leader Michaloliakos and imprisoned MPs Kasidiaris, Christos Papas, Ioannis Lagos, Giorgos Germenis, Nikos Kouzoulos, Panagiotis Iliopoulos as well as ex member Stathis Mpoukouras, should appear before the judge. According to his recommendation, every current or ex MP belonged to the criminal organization’s “hard core” that operated under the party’s cloak.
The prosecutor recited all the charges being brought against Golden Dawn, underlining the murders of anti-fascist rapper Pavlos Fyssas (a.k.a. Killah P) in September 2013 and Pakistani immigrant Luqman Shahzad in January 2013, as well as several individual assaults on foreign nationals and leftist activists, including the attack against PAME members in Piraeus, just a few days before Fyssas’ murder.
Although, the party leader as well as MPs Pappas and Lagos will be released from custody on March 27, ahead of their trial tentatively scheduled for April, as the maximum 18-month period in pre-trial custody expires. A specific date for the trial has not yet been set but, according to judicial sources, it will take place after the April 12 Greek Orthodox Easter. Michaloliakos and Pappas will remain under house arrest as they face additional charges of weapons possession.