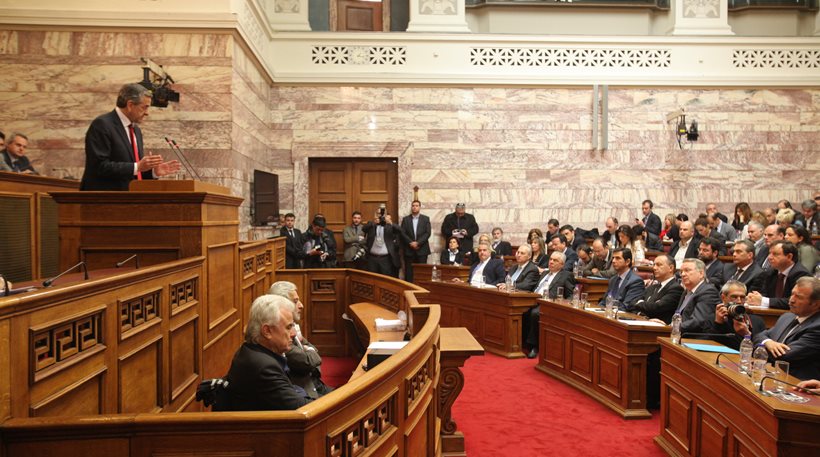 Unity should prevail. This was the message former Greek Prime Minister and main opposition New Democracy leader Antonis Samaras highlighted while addressing the party’s MPs behind closed doors earlier today. As he further stressed, he is in not “glued” to his chair but he would not consider leaving the party’s leadership at such a critical point in the country’s history.

Samaras’ appearance was seen as a clear message to all directions that he is not willing to step aside or start the process for his succession in the wake of the heavy electoral defeat the party suffered in January 25 and opinion polls revealing the gap between ruling SYRIZA and New Democracy is constantly growing, reaching an enormous 22.1 percentage points. On the opposite, Samaras challenged any New Democracy MPs that doubt his leadership to openly state it and request the procedure for a leadership congress.

Once again, the former Prime Minister attacked the SYRIZA-led government, saying they “know that their unity is fragile and the toughest fight is still to come,” while adding that “we are not in a hurry to break them apart. They are in a hurry to destroy themselves with what they do.”

In the days following the electoral defeat, a number of New Democracy MPs and members have publicly accused Samaras and his closest associates for a wrong strategy that lead to the defeat. Among others, former government spokesperson of the Karamanlis administration Evangelos Antonaros has once again spread discomfiture among party members after tweeting that the party should proceed to a “political redefining in order to get rid of the extreme right schlock and neo-liberal doctrine.” At the same time, former Foreign Affairs Minister of the Karamanlis administration between 2006 and 2009 Dora Bakoyannis, in a recent interview to Greek TV, did not rule out the possibility of challenging the party’s leadership in the near future after what was seen as a major defeat in the recent Greek general elections. “What I have to say, I will say it to the Parliamentary Group,” she declared then, adding that Greece needs a “healthy and powerful center right front,” which does not reflect New Democracy’s current situation.

The number of Covid-19 patients on ventilators in Greece on Friday has reached record highs, as 790 people are now intubated in the country.
Europe