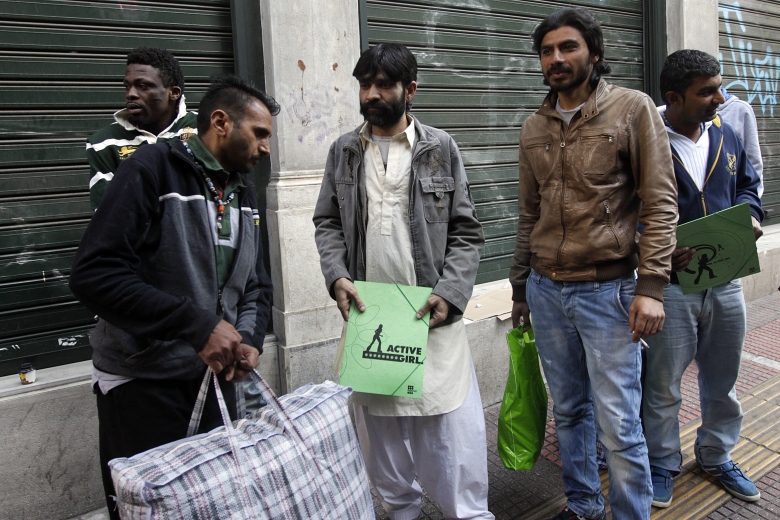 The operation to evacuate and shut down the Amygdaleza migrant detention center in Greece continues with very little success. The vulnerable groups that should have been removed first are still in while the migrants who have been released are finding shelter on park benches and squares.
The two Citizen Protection and Migration Policy Deputy Ministers, Yiannis Panousis and Tasia Christodoulopoulou, had said that priority will be given to those detained for more than 18 months, those who were vulnerable — such as families, children, pregnant women, unaccompanied minors, torture victims, ill and elderly — and those seeking asylum.
However, since Sunday, when evacuation of the Amygdaleza facility had started, the migrants transferred to downtown Athens by bus, escorted by Greek Police cars, do not belong to the above categories. There were no children, women or elderly to be seen coming out of the buses.
So far, most migrants have gathered in downtown Athens’ Omonoia Square and have settled down on the streets. Most of them are now homeless, without money and food, in an unknown environment.
A television report showed Naim, a migrant who was left in downtown Athens. He had no shelter and when he went to the municipal soup kitchen to eat, all the food was gone. He ended up sleeping on the grass in Koumoundourou Square. Naim revealed that among the released migrants were some ill, even in serious condition.
The same report followed another migrant, this one anonymous, who, after being released from Amygdaleza, ended up staying with four others in a filthy room, in squalid conditions.
Christodoulopoulou said on Thursday that it was a police decision to release illegal migrants and not her own. Panousis admitted that it was a mistake to take all released migrants to downtown Athens.