GRNews
GreekReporter.comGreek NewsEconomyGreek Gov't Looking More and More Like the Tower of Babel

Greek Gov't Looking More and More Like the Tower of Babel 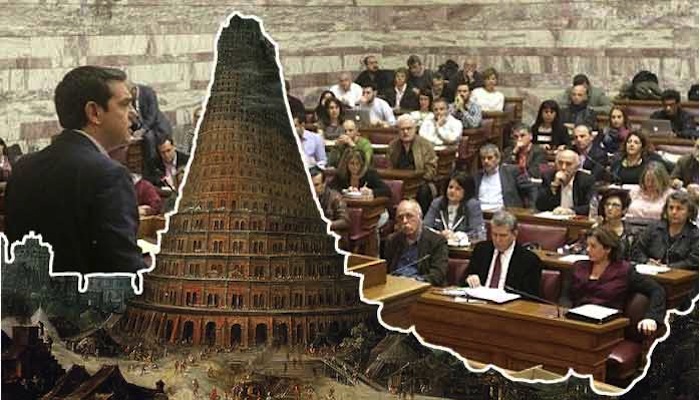 A little over a month in the Maximos Mansion and it seems that the Greek government officials are in constant competition with each other over who is going to sound more leftist, more “for the people,” who commiserates more, who is more true to his campaign promises, who is more humble and dedicated to the “cause.”
SYRIZA MPs and cabinet members continuously contradict each other; and themselves. It is as if some of them make two different statements for each major issue: one for the European Union and one for internal consumption. One for the creditors and one for the crisis-stricken Greeks.
The debt negotiations and the extension deal signed is the point where the most contradictions occur. Finance Minister Yanis Varoufakis says that leaving the euro zone would be a disaster and at the same time another SYRIZA MP and economics expert, Costas Lapavitsas, states in a British newspaper that Greece will never come out of the crisis if it remains in the common currency bloc. Other SYRIZA cabinet members openly criticize Mr. Varoufakis for giving too much to the lenders.
Regarding repayment of debts to the state, Deputy Finance Minister Nadia Valavani took back the proposal for a haircut of the capital owed and retained the writeoff of all penalties imposed. Mrs. Valavani claimed that she should take into consideration the opinion of other economics experts, despite the fact that she believes there should be a writeoff of capital.
On the privatizations issue, the finance minister tells Greece’s European partners that some of them will be completed while Minister of Productive Reconstruction Panagiotis Lafazanis repeats publicly that no state property will be sold. For most government officials and SYRIZA MPs free enterprise is an anathema, a concept to be abolished. And when they speak of growth and development, they have in mind an imaginary treasury with unlimited funds for public works, social welfare and fat pensions.
Today Deputy Citizen Protection Minister Yiannis Panousis had to publicly deny an order allegedly issued by higher Greek police authorities saying that all illegal immigrant detention centers will be closed and illegal immigrants will be set free, while the borders will be open and no illegal immigrant will be detained but he will be given documents to move freely in Greece or move to other European countries. He said that there is no new immigration legislation signed yet and the official who signed the circular did not notify the deputy minister. However, Mr. Panousis has openly criticized the Schengen Treaty and made the decision to shut down the Amygdaleza migrant detention center on the basis of inhumane conditions and set detainees free.
The main reason this polyphonic madness exists is the “more leftist than thou” competition between SYRIZA members. That would have been entertaining in student unions, but not inside the parliament. These people were elected to represent their constituents, not to make a spectacular show of their political beliefs. To work for the people, not for their inflated egos. This battle of egos has turned the Greek government into a Tower of Babel. And the Greek people can’t understand what’s going on because they hear one thing today and then another tomorrow.
Recently Alexis Tsipras was forced to resort to cheap propaganda to appease Greeks who are worried about the economy and the SYRIZA left platform who speak uncontrollably against the temporary debt agreement. Creating imaginary enemies is a good propaganda technique and has worked wonders for SYRIZA in the past. This time the Greek prime minister accused the prime ministers of Spain and Portugal of undermining Greece’s efforts to come to a fair agreement over the debt, for “pushing Greece to the brink for their own political benefit.” So, Mariano Lajoy and Pedro Coelho are added to the list of Greece’s “enemies” along with Wolfgang Schaeuble, Angela Merkel, ___ (put your names of choice here). So, the Greek media, aided by irresponsible statements by state officials, depict German officials as Nazis, the Spanish and Portuguese premiers as ruthless rightists who want to destroy Greece, other EU officials as bloodthirsty capitalists who want to turn Greece into a debt colony. By now, a large percentage of Greeks are convinced that, indeed, these people are our enemies.
The irony is that we keep asking these people for loans. We sit at the same table with them and we call them “partners.” We declare our loyalty to the European institutions and ideals and at the same time we turn our head and call them bloodsucking vampires.
Unfortunately, for the Greek government the actual enemy is reality. And reality is far stronger than leftist babble, far stronger than good intentions and wishful thinking.
It is no surprise then, that the only person in the cabinet who is in tune with reality receives the most fire from the obsessive leftists. Yanis Varoufakis has lived abroad for most of his life. He has lived in countries with robust economies such as the U.S.A. and Australia. He knows what a real economy is. Something that the leftist fanatics in the cabinet seem to have no idea about.