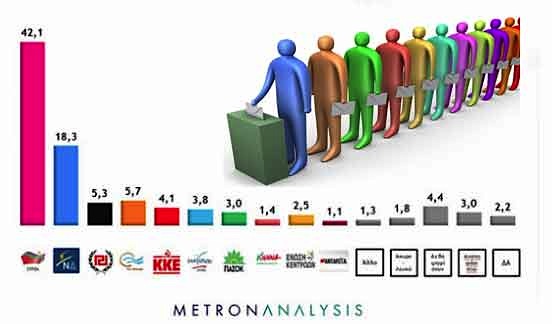 Greek ruling party SYRIZA leads by a wide margin over main opposition New Democracy, according to a Metron Analysis opinion poll conducted on behalf of newspaper “Parapolitika,” published on Saturday.
The poll was conducted right after Greece signed the Eurogroup deal.
According to the survey, SYRIZA secures 42.1% in voting intent, New Democracy gets 18.3%, “To Potami” 5.7%, Golden Dawn 5.3%, Greek Communist Party (KKE) 4.1%, Independent Greeks (ANEL) 3.8%, PASOK 3%, Centrists Union 2.5%, Democrat Socialists Movement (KIDISO) 1.4% and ANDARSYA 1.1%.
The vast majority of respondents (68%) said they are satisfied with Greece’s negotiations with Europe, while 23% considers the government’s handling of the talks as negative.
Another 76% sees the government’s course as positive so far, versus 18% who have a negative opinion.
Asked who is more suitable for Prime Minister, Alexis Tsipras leads with 55% and Antonis Samaras way behind with 13%.
Of those participating in the poll, 81% are in favor of Greece staying in the euro, while only 15% prefer returning to the drachma.
(source: Parapolitika)