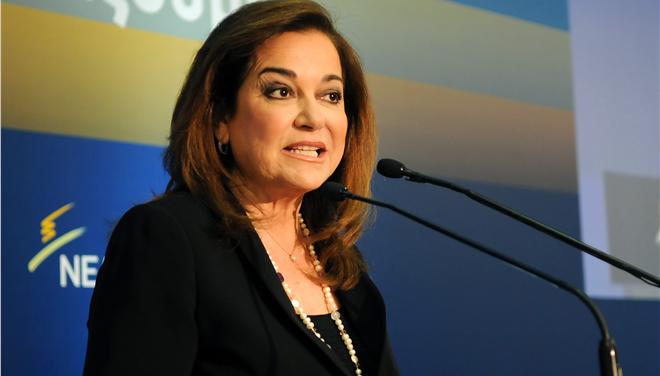 New Democracy MP and former Foreign Affairs Minister of the Karamanlis administration between 2006 and 2009, Dora Bakoyannis, did not rule out the possibility of challenging the party’s leadership in the near future after what was seen as a major defeat in the recent Greek general elections. In an interview with Greek Skai TV, the experienced politician underlined that she will express her will when the party’s Parliamentary Group convenes.
“What I have to say, I will say it to the Parliamentary Group,” she declared, adding that Greece needs a “healthy and powerful center right front,” which does not reflect New Democracy’s current situation. Furthermore, as she explained, she has no personal goals and her only desire is to see the party “recover” and find its right political outlook once again.
Moreover, Bakoyannis highlighted that New Democracy is currently facing strategic, political and operational problems that can only be solved by a “clear, internal discussion” kept away from “personal strategies” of any kind.
Commenting on the new SYRIZA-led government, she said that it was inevitable not to submit the recent Eurogroup agreement to the Greek Parliament in order to be ratified and argued. She noted that the time to face reality has come for the government.
New Democracy’s Parliamentary Group is scheduled to convene next Thursday, March 5, while the party’s Political Commission has arranged to convene on the following Sunday, March 8. Numerous major party members are expected to express their disagreement with the previous government’s applied policies in a series of issues that lead to a heavy electoral defeat, while the possibility of a leadership swap remains open, as many have already challenged former Prime Minister Antonis Samaras’ personal decisions through the 2.5 years of his administration.