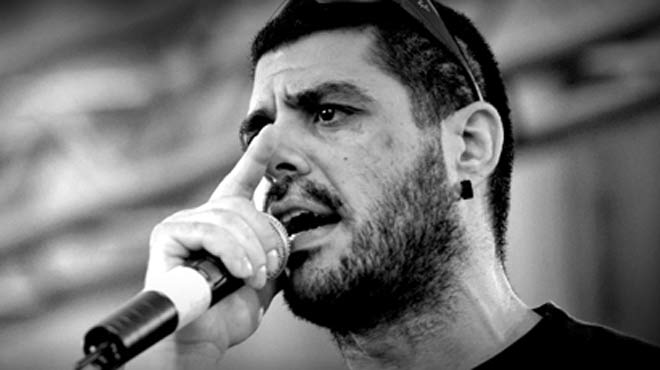 The memorial of anti-fascist activist and rapper Pavlos Fyssas, who has been assassinated by extreme right, xenophobic Golden Dawn member Giorgos Roupakias in September 2013, has been defaced by unknown individuals on Wednesday night. The local memorial, erected on the spot where Fyssas was killed in the Keratsini district of Athens, has been vandalized with a large red spray-painted swastika and the acronym C18, referring to “Combat 18,” a neo-nazi organization associated with the British “Blood and Honor” network.

Thirty-four-year-old Fyssas was stabbed to death in the early hours of September 18, 2013, by a Golden Dawn supporter, while according to later evidence, the murder has been perpetrated on orders from higher-ups in the chain of command, triggered a crack-down on the party. This lead to the arrest of top Golden Dawn officials, who are currently under custody, awaiting their trial on charges of operating a criminal organization. In his 700-page argument, prosecutor Isidoros Dogiakos proposed that a total of 70 party members, among them Golden Dawn’s imprisoned leader Nikos Michaloliakos and imprisoned MPs Ilias Kasidiaris, Christos Papas, Ioannis Lagos, Giorgos Germenis, Nikos Kouzoulos, Panagiotis Iliopoulos as well as ex member Stathis Mpoukouras, should appear before the judge.

On the one-year anniversary of the murder that shocked Greece, causing numerous anti-fascist demonstrations, a memorial to Fyssas was unveiled at the site where he was killed, featuring his own lyrics. 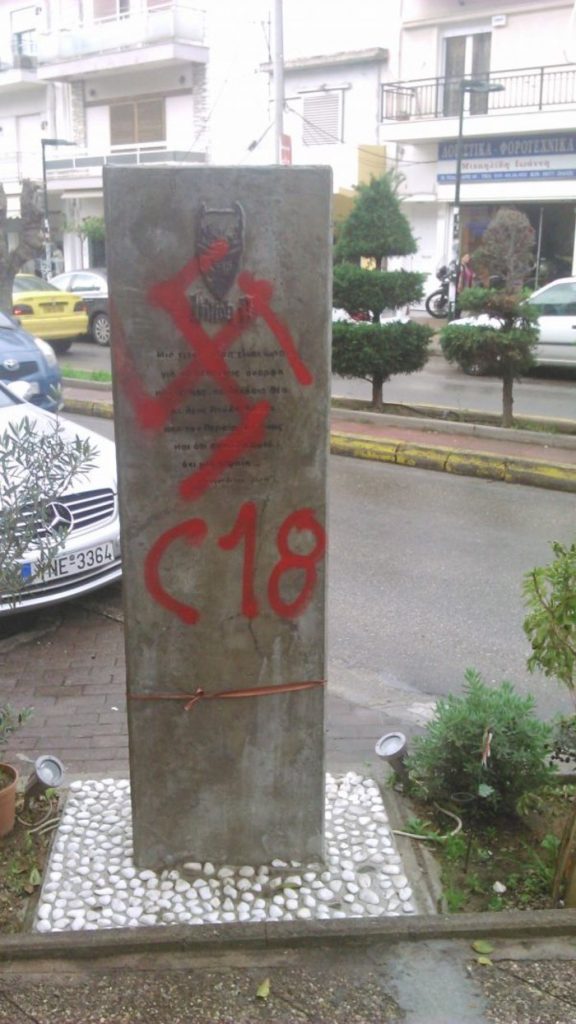 The local council of the Keratsini – Drapetsona municipality in condemnation of the heinous act of vandalism released the following statement:

“In the early hours of Tuesday, February 24, unknown individuals vandalized the memorial of Pavlos Fyssas at the site where, in September 2013, he was murdered by members of the Golden Dawn fascist gang. A swastika and fascist slogans covered the bust of the anti-fascist musician. The new, brazen provocation and the reappearance of fascists in our city’s streets proves that this front remains open.

Our municipality condemns this cowardly fascist attack at the murder site, a place with particular symbolic importance to us, a memorial site that reminds our city’s residents that the fight against the threat of fascism must be constant in schools, workplaces and our neighborhoods.”