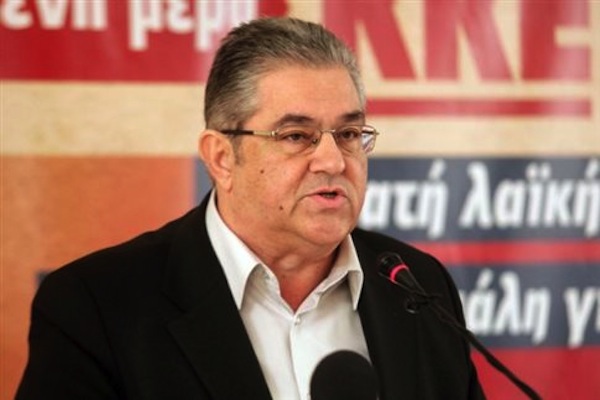 In Friday’s big rally at Syntagma square, the Greek Communist Party (KKE) wants to inform the Greek citizens on its positions, the party secretary-general Dimitris Koutsoumbas on Thursday told ANT1 TV.
People should not be disappointed, Koutsoumbas noted adding that they should get organized and fight.
Among the things that the communist party will seek is the legislating of the minimum wage at 751 euros, the restitution of the 13th and 14th salary and pension, the restitution of collective agreements, the abolition of Uniform Real Estate Ownership Tax (ENFIA) and anti-popular tax laws and a 40,000 euro tax-free threshold for each family.
Regarding the draft law tabled in Parliament by the communist party for the abolition of the memorandum and the implementation laws, he said that this can be done in a single law and reiterated that this proposal had been submitted to a parliament committee and it had been voted for in principle by SYRIZA too.
“According to what has been announced, SYRIZA needs to submit the proposal to the parliament plenary,” he added. Koutsoumbas said that the government’s statements regarding a “hard” negotiation with the creditors is a “publicity scam” adding that negotiation within the specific framework means that what the creditors say will be taken into account.
The secretary-general underlined that we will have a new memorandum late June — regardless of the name — which will include 70 percent of what has already been agreed while the remaining 30 percent will include measures from the OECD toolkit.
(source: ana-mpa)

Reunification of Parthenon Marbles is ‘an International Demand’