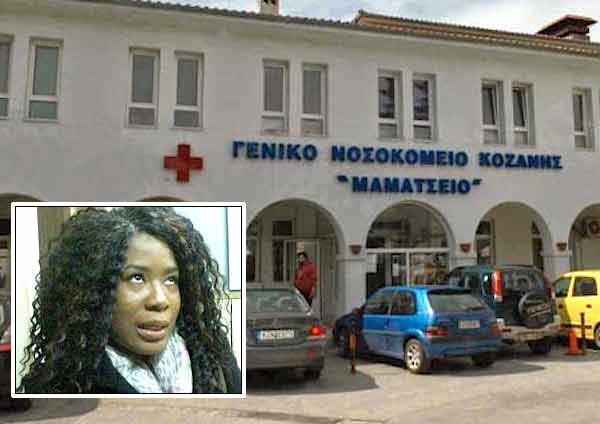 A Nigerian doctor who has been living and working in Greece for the last 14 years was the victim of a verbal and racist attack from a patient in Kozani, northern Greece. Dr Solace Akpevwe Godwin was on call when the 57-year-old patient arrived at the hospital complaining about breath shortness. After a quick examination, the 29-year-old doctor decided to admit the patient who appeared bothered and started shouting.
When he calmed down, with the administration of the necessary medication, the patient told Godwin “you need a Hitler and soap” referring to Hitler’s horrific practices during World War II. The 29-year-old woman was speechless and rushed to contact authorities. When authorities arrived, the 57-year-old patient denied the allegations, but in the end he admitted his racist verbal attack and apologized.
Medical Association of Kozani president Charalambos Tsevekidis stated that Godwin is a great woman from Nigeria, adding that she grew up in Greece, receiving the Greek nationality. “This is an unprecedented event in the region and we are all saddened by it. Things like that cannot be said even as a joke.”
The public prosecutor in Kozani filed charges against the 57-year-old patient whose case was tried on Thursday, February 26. The man was sentenced to six months in prison with a three-year suspension. He was also asked to apologize to the doctor.
However, this is not the first time the doctor has attracted media attention. In 2014, during the Medical Association’s election, she was told that she could not vote, which led her to write a formal notice expressing her bitterness and disappointment.
In her notice, Godwin said that even though she a Nigerian native, she has obtained Greek nationality and has been living in the country for 14 years. She went to school in the country and studied at the Medical Department of Democritus University in Thrace. She also stressed that she was not able to vote in the Medical Association election due to a Greek legislation -passed in 1957- which stressed that foreign doctors do not have the right to vote and elect.
Godwin noted the irony of the situation, since the anti-racism law had recently been tabled in the Greek Parliament. “Instead of hiding behind our fingers and saying that in theory we are all equal, we need to act. We are all equal and I invite all clubs, societies and associations to show that in practice. As a doctor I gave an oath to treat every person as equal and I live in accordance with it, inside and outside my work space. I therefore urge those who agree with this to ensure the abolition of this unjust law, not just for my sake but to show the Hippocratic oath’s true meaning.”