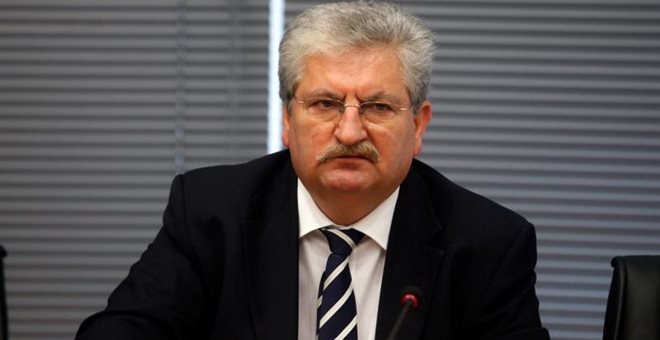 Former head of Financial Crime Squad (SDOE) and public prosecutor Yiannis Diotis is accused by former finance minister Giorgos Papakonstantinou that he is responsible for adulterating the “Lagarde List”.
Giorgos Papakonstantinou served as finance minister during the George Papandreou administration and is accused of falsifying the list of tax evaders who have deposited excessive funds in a Swiss bank. Specifically, he is accused of removing several names from the list, including members of his family.
A few days before Giorgos Papakonstantinou appears in front of the Special Tribunal with the accusation of falsifying the list, Real News Sunday newspaper reported that the former finance minister told the Supreme Judicial Council of the Supreme Court that the former SDOE chief is the person who adulterated the Lagarde list.
According to the report, Mr. Papakonstantinou pleaded in his defense that Mr. Diotis destroyed the USB stick he had given him and that Mr. Diotis did that intentionally and not accidentally, as it was claimed before.
Mr. Papakonstantinou also said the USB stick the former prosecutor gave to his successor in the finance ministry, Evangelos Venizelos, was adulterated. He also refused again that he was the one who had tampered with it.
It should be noted that an appeals court has cleared Mr. Diotis of charges of destroying a document but requested that he should be tried for breach of trust as the former SDOE chief failed to audit the names on the list.
The Lagarde list has been named after the former French Finance Minister and current head of the International Monetary Fund, Christine Lagarde, as she handed the list to Papakonstantinou in 2010. The list contains the names of alleged Greek tax-evaders who have been hiding deposits in accounts of HSBC branch in Geneva, Switzerland.