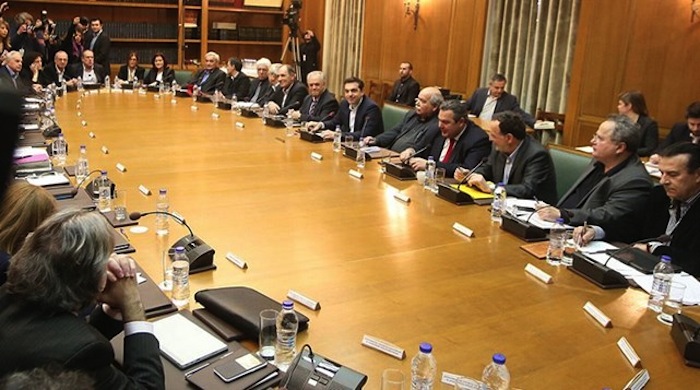 The Greek government’s list of recommended reforms will finally be submitted to the international institutions on Tuesday morning. According to latest information emerging from the Greek government’s headquarters, the climate among the cabinet members is positive as the reforms will be based on the guidelines of the Eurogroup’s agreement and thus it is expected they will be approved.

“The list will be submitted and I am absolutely certain it will be approved,” the Greek Finance Minister Yanis Varoufakis stated on Saturday, indicating the government’s optimism. If the list is finally approved tomorrow, then the Eurogroup will hold a teleconference which will officially signal the “green light” for the loan agreement four-month extension. The Eurogroup Finance Minister’s teleconference, with the participation of the International Monetary Fund (IMF) Managing Director Christine Lagarde, the European Central Bank (ECB) President Mario Draghi and the European Commissioner for Economic and Financial Affairs, Taxation and Customs Pierre Moscovici, has also been confirmed by sources of the Greek Finance Minister.

So far, all reports emerging from Athens indicate that the list drawn up will include commitments to tackle tax evasion and corruption, public sector reforms and measures to address the humanitarian crisis. Moreover, according to the Greek Mega Channel, the list will include changes based on the Organization for Economic Co-operation and Development (OECD) proposals, commitments for further independence granted to the Public Revenue General Secretariat, the evaluation of the Public Sector and mobility without layoffs, while reference is made to the promotion of the privatization plans. As an unnamed Greek official told the Financial Times, the reforms will mainly be of a “structural nature.”

However, a specific budget is not described on the list of measures, but this should not cause problems since institutions are expected to persist on some of the interventions aligned with the previously agreed program that expires on February 28.

Meanwhile, the list drawn up will not include issues relating to employment, such as the pre-election promise of a minimum wage increase to 751 euros, the insurance policy, the auctions abolition and the intake of public sector employees, who have been fired, as all the above are considered domestic policy issues.