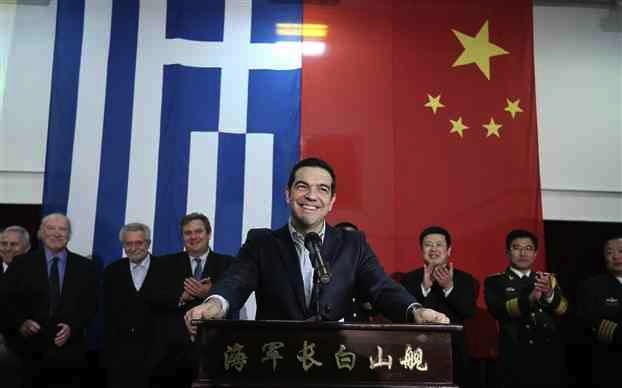 We support the present Chinese investments in Greece, including COSCO’s, and want to make a name for the port of Piraeus as a top hub in transport and commerce globally, Greek Prime Minister Alexis Tsipras said on board the visiting Chinese tanker “Chang Baishan” on Thursday evening at the main Greek port.
Speaking during a ceremony to welcome the China’s 18th Fleet at Piraeus port, Tsipras said that the government supported investments that benefit both Greek and Chinese peoples, whose relations were long-term and served as a sound base for future joint projects, in transportation and railroad links among others.
Tsipras spoke of the ongoing collaboration in shipping, with the building of Greek ships at Chinese shipyards and in commercial trade, as well as that of the two navies that worked together to fight piracy on an international scale.
Other sectors of collaboration include tourism and culture sectors; the government said it would support initiatives such as cultural study programs, student exchanges and exhibitions to this effect.
Tsipras also pointed out the importance of collaboration between the two countries in humanitarian help, especially when it comes to evacuating citizens from crisis points like Albania and Libya.
Greece will always support the Chinese people, he said, and wished them progress and prosperity in the new Chinese year, which begins today (Feb. 19).
Chinese Ambassador to Greece Zou Xiaoli thanked Tsipras for his presence at the event and added that China is interested in strengthening collaboration between the two countries, at they are “both on the same ship sailing towards hope and prosperity.”
The Chinese officials honored the Hellenic Navy and Greek shipowners for helping evacuate Chinese citizens from Libya during summer last year and less recently from Albania, on board the tanker.
Also docked at Piraeus are the frigate “Yun Cheng” and the tanker “Chao Hu”, all under the deputy commander of the South Sea Fleet, Rear Admiral Zhang Chuanshu. A delegation from the fleet visited the Greek fleet headquarters, while a joint exercise was held at sea. The fleet is leaving Piraeus tomorrow, Friday.
The event was also attended by ministers Panos Kammenos (national defense), Costas Isychos (alternate, defense), Thodoris Dritsas (alternate, shipping), Nadia Valavani (alternate, finance) and Panagiotis Lafazanis (productive reconstruction, environment and energy minister).
(source: ana-mpa)