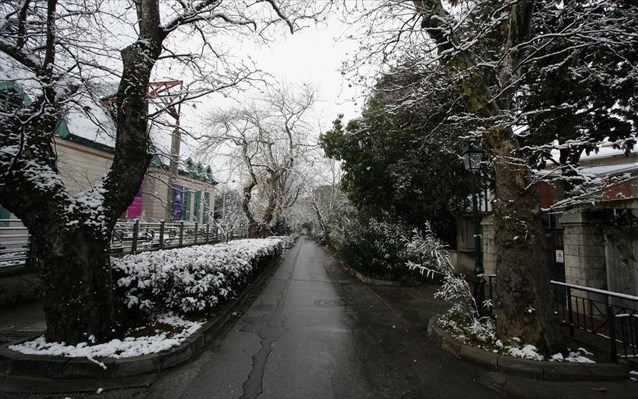 People in Attica, Greece woke up to find their cars and yards covered in snow. Weather conditions across Greece are quickly taking a turn for the worse causing major problems both on land and sea.
The areas of Parnitha and Penteli in Attica are covered in snow while several roads have been closed. Furthermore, ports across the country are facing a slight issue due to the extreme weather conditions and strong winds reaching up to 8 on the Beaufort scale. Several scheduled ferry trips have been cancelled in the ports of Rafina, and Agia Marina. Piraeus and Lavrio ports — the major Athens ports — are operating as usual.
While the weather in western Greece is expected to clear, other parts of the country will experience rains, hail and snow especially in the regions. According to the Hellenic National Meteorological Service the cities that will be most affected by the weather over the next days are: Volos, Lamia, Kymi, Chalkida, Livadia, Thebes, Attica, Corinth, Nemea, Andros, Tinos, Naxos, Chania, Heraklion, Rethymnon and the Dodecanese islands.
As of Thursday, the temperature in Attica, Greece is expected to fall below zero, reaching -2 degrees Celsius and the strong will continue reaching up to 7 on the Beaufort scale.
Meanwhile, in Thessaloniki, northern Greece the wind will be significantly calmer, reaching 3-5 on the Beaufort scale while the temperature will range from -3 to 3 degrees Celsius.